At Home: Where There’s Smoke

As The Globe and Mail reports, experts believe that wildfires will soon ?double in number.? And it isn’t limited to drier climates; ?the northwest could be hit the hardest, with some projections saying British Columbia and Alaska will have five or six times as many fires.?

Experts are also concerned that the increase in number of wildfires will be accompanied by an increase in the intensity of the blazes, ?with many [fires] being too big and too hot to stop using traditional fire fighting methods.?

This will make fire management more challenging even for modern agencies, who will be unable to fight fires head on or by using aerial suppression. It’s particularly of concern in other countries, where fire fighting methods may be less developed. ?The risk to life and infrastructure is only going to increase under climate change,? Dr. Flannigan told reporters.

Around the World: Stay Frosty

Move over, futuristic labs: the ancient world had cryogenics all figured out. So say scientists after finding 30,000-year-old seeds and fruit perfectly preserved in ice.

As The Globe and Mail reports, scientists have been able to successfully regenerate a plant from ?fruit tissues? found in a ?burrow . . . that had been stuck in the Siberian permafrost for over 30,000 years.?

The regenerated plant is ?fertile, producing white flowers and viable seeds.?
Burrows like the one where the tissues were found are ?often totally filled with ice, making any water infiltration impossible?creating a natural freezing chamber fully isolated from the surface.?

Scientists hope to resurrect, other ancient plant species buried in the permafrost, which one researcher told reporters makes ?a natural cryobank.? In the future they hope to discovered well-preserved animal tissue as well. 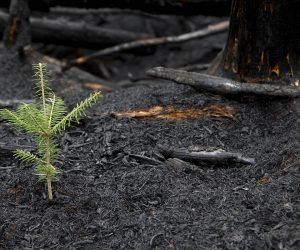