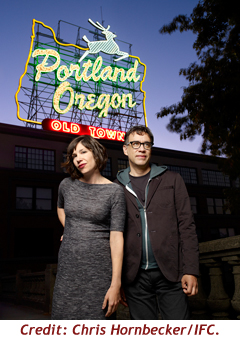 ?Portlandia is the city where young people go to retire!?

We Built This City on Bean Sprouts and Cultural Amnesia

Peter and Nance are at their favourite organic restaurant. They want the chicken, but they’re aware, so they need to ensure that the bird they ingest is not only free of chemical nasties but also happy and fulfilled.

After interrogating the waitress they end up driving out to the chicken farm to scope out the conditions in person. They immediately become infatuated with the enigmatic polygamous chicken farmer, Aliki. Then they wake up five years later and realize that they’re both wearing prairie princess dresses and that their brains have morphed into tofu. They return to the restaurant and decide to order the salmon. But they want to eat only contented, serene salmon . . .

Yeah, It’s a television show?the first television show I’ve ever recommended in this column?but it pulls off the singular feat of looking and sounding too good for television while taking advantage of the few simple benefits the medium offers artists. With television, limited time and the short attention span of viewers demands great timing and a verbal frugality that can only improve the quality of a production.

Portlandia represents America at the current weird postmodern crossroads?the ghastly consumerism of the past reinterpreted in the light of the fads and phases of the last half-century. You’ll meet strippers, sales clerks, musicians, a guy who makes handcrafted light bulbs (that cost a fortune and only last a couple of days), dumpster diggers, euphoric cyclists, a mad mayor, a couple of snooty lesbians who run a feminist bookstore, and an aging biker who’s been hiding out at the library for years unseen (he’s even set up a little cubicle for himself complete with bed, books, music, and bottles of urine). And there’s the delight of seeing cameo appearances by some great cult figures, including Sarah McLachlan, Amee Mann, and Steve Buscemi.

Among other things the show spoofs ?being creative,? artistic pretensions, trend slavery, and the absurdities of the counterculture moral code which in rigour alone rivals the ethical constructs of felons.

Portlandia is all about post-grunge 1990s alternative culture, but It’s also about bohemian societies of any age or locale. I grew up in a counterculture community wherein I was able to observe the Woodstock generation through a child’s eyes. The hypersensitive health food hipsters I remember came from the same mold as the Portlandia crew, and indeed the whole peanut gallery is there: the airy fairy girls who croon, in baby voices, Why don’t you come visit? and then run and hide if someone knocks at their door; the designer who freaks when she finds that her house sitter has left a can of Spam in her fridge (?I always wondered what kind of people ate that, and now I know!?); and the New Age neurotic who divorces her stunned husband but continues living with him after bringing home her young European husband to move in with them and then emotionally bullies her daughter into accepting this as normal.

If only I’d had Portlandia back then! It might have rendered this Kafka-esque reality a little easier to digest.

The critics who just don’t get this series amaze me. One reaction is similar to one of the early criticisms of the ingenious Seinfeld: The characters are just too annoying to be funny. One critic even remarked on how Portlandia must be low-budget?since Brownstein and Armisen are in every sketch?totally missing the genius of actors playing multiple characters. No creative work ever lost an ounce of artistic merit as a result of budget restrictions. Scope, maybe, time, definitely, but merit, no.

Portlandia is actually sketch comedy in sitcom clothing. You have a setting, a premise, and a bunch of characters, but no story arc?just a bunch of subplots, each with characters you may never see again. It works. 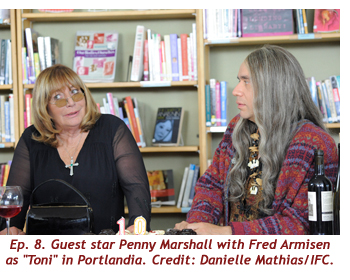 Why should mindful bards watch Portlandia? For one thing, so that we can wake up and say, ?There but for the grace of God go I.? The dangers to artistic pursuit are clearly spelled out: insularity, conformism, trend addiction, narcissism, egotism, and a slavish worship of that fickle god, creativity.

When you get into this space, just say to yourself, with Walt Kelly, ?don’t take life so serious. It ain’t nohow permanent.? All the belly laughs on this show make this an easy directive to follow.

Portlandia fulfills five of the Mindful Bard’s criteria for shows well worth watching: 1) it is authentic, original, and delightful; 2) it provides respite from a sick and cruel world, a respite enabling me to renew myself for a return to mindful artistic endeavour; 3) it is about attainment of the true self; 4) it makes me want to be a better artist; and 5) it makes me appreciate that life is a complex and rare phenomenon, making living a unique opportunity.