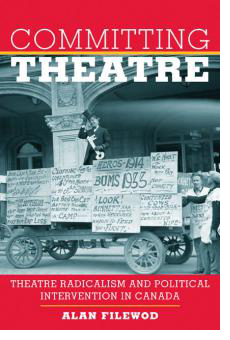 ?In the end the story of the Mummers illustrates, even establishes, the principle that radical intervention theatre is a theatre of refusal.?

The High Cost of the Artist’s Right to Refuse

In high school in Nova Scotia we would occasionally file into the auditorium to see some travelling theatre troupe enact the legends of Glooscap or a drama about cultural rifts between urban and rural communities. It wasn’t exactly Shakespeare, but these performances had the effect of lifting me from the miasma of the daily school grind and all the ugliness that went with it. It got me thinking about the outside world and about my own identity.

In the 1980s the Codco troupe, one of a number of ragtag Newfoundland groups vying for government funding, got accepted by a major television network. Their weekly half-hour sketch comedy show allowed all of us to see into this terrifying and hilarious mirror of Canadian Maritimers. The show eventually morphed into This Hour Has 22 Minutes, a satirical news show beloved of disgruntled Canucks from sea to shining sea, showing up our foibles and inconsistencies and poking fun at the status quo.

This was the opposite spectrum of Halifax’s Neptune Theatre, one of my favourite haunts, the place to go to indulge a love of theatre as art, a place to see Ibsen, Shakespeare, and musical revues. But, as this book points out, the one could not have thrived without the other.

Committing Theatre explains in detail the contexts?and the terrible struggles?that led to the development of theatre as a vehicle for dissemination of progressive ideas in Canada.

In the 1970s the Mummers Troupe of St. John’s had a hard time acquiring the government funding required by any fledgling theatre company. The Troupe, part of the popular theatre movement, was politically motivated and ready to move around the province, performing in any venue that would have them. The members started with agitprop (a Soviet term meaning agitation plus propaganda) and ended up reaching out to rural communities in an effort to unite people with a message of social justice.

The Mummers quickly developed a reputation for not taking any crap from the hands that could have fed them, which did not bode well for their future survival. What’s more, ideological rifts and a refusal to bend ideals to meet pragmatic demands led to severe conflicts within the Troupe itself. One of the central issues was that these socialists were being asked to twist their agenda to meet the demands of a business model they abhorred.

Most young artists cherish the notions that art transcends money and that administrations are not to be trusted. Unfortunately, all art is to some extent dependent on Mammon and therefore must either find a means of pocketing the distrust of money and power in order to secure financial support or search for ways to simplify productions in order to stay within a small or non-existent budget. In the theatre arts in particular, these strictures may quash a good deal of creativity?but have also been the catalyst of much brilliant innovation.

Sadly, the days of leftist theatre companies are usually numbered. Why? Because radical theatre is, in the words of Alan Filewod, ?a theatre of refusal.? The refusal to accept and support the existing order goes hand in hand with the refusal to compromise ideals in order to stay afloat financially. Unfortunately compromising one’s ideals does not always bode well for an organization either. But this is the kind of quandary with which every artist is faced.

Committing Theatre is extremely well-written and creates an amazing history of Canadian radical theatre (a phenomenon characterized by an absence of written records), but it is also a road map of one of the single most daunting challenges to the artistic life: survival. It points out historical examples of the things that can go wrong and shows how some ingenious groups and individuals have managed to keep on going and create amazing material while operating at a loss.

The book gives anecdote after anecdote, illustrating the impossibility of free theatre in Canada. In order to qualify for government funds, troupes must sacrifice their missions and purposes. The bourgeoisie love theatre as art, and the left loves it as a vehicle of social change, a thing that the rich and the middle classes will not normally support.

As Filewod writes, ?They frequently came to the same solution: that radical activist theatre cannot happen in the framework of a box-office financial structure.?

The bottom of the pyramid, the place where the money trickles no further, the place beyond the reach of government coercion because the government will not pay for it?That’s where the inspiration is. The unfunded radical theatre fringe is the lifeblood of theatre as a whole. Without the Mummers Troupe and other radical fringe groups contemporaneous with Codco, Neptune Theatre would be dead.

Committing Theatre fulfills six of the Mindful Bard’s criteria for books well worth reading: 1) it poses and admirably responds to questions that have a direct bearing on my view of existence; 2) it stimulates my mind; 3) it harmoniously unites art with social action, saving me from both seclusion in an ivory tower and slavery to someone else’s political agenda; 4) it gives me artistic tools; 5) it makes me want to be a better artist; and 6) it renews my enthusiasm for positive social action.

In Conversation With . . . Gabi Epstein