Articles
The Voice
In Conversation with . . . Ensemble Polaris, Part I

Ensemble Polaris is a group of musical masters who have joined together to perform music from the northern latitudes. Some of the musical traditions they embrace include, according to their website, ?early, folk, Klezmer, Hot Club of Paris, middle Eastern and southeast Asian, traditional Scandinavian, Celtic, Cape Breton, eastern European, classical, improvisatory, and avant-garde.? They’ve just released their fourth album (see the Voice review of Uncharted Waters).

Recently, flautist Alison Melville and clarinetist Colin Savage took the time to answer Wanda Waterman’s questions about repertoire, musical experiences, and how the group was formed.

Whatever possessed a bunch of musicians to come together and make music based on ?the idea of North??

According to Colin Savage, it was both an organic process and an idea whose time had come. This may be why the group found it so easy to stay together and to thrive musically.

Says Colin: ?In 1997, the first Northern Encounters Festival took place in Toronto, bringing choirs, musicians, and composers from Scandinavia to collaborate with Canadians in an exploration of circumpolar music. The Toronto Symphony Orchestra conductor at that time was a Finn, Jukka Pekka Saraste. The CBC was involved in presenting and broadcasting concerts of ensembles large and small, and they had a slot for a local chamber group.

?Alison had been interested in Scandinavian folk music for some time, so she assembled a group of simpatico players on an unusual combination of instruments; the musical result was intriguing, both to us and to the audience. The membership of the band has changed very little since then. Colleagues often ask if they can join us because we seem to be having so much fun.?

The group has since expanded its repertoire to include songs from Mediterranean countries and compositions from group members, but Scandinavian repertoire is still a mainstay.

. . . And a Peculiarly Northern Background

Alison’s talent for envisioning and organizing artistic projects was no doubt inborn, but might also owe something to a childhood that was both stimulating and supportive of her special musical gifts.

?My parents moved around a lot when I was a child,? she says, ?so although I was born in Toronto I lived in Calgary, Winnipeg, Barrow-in-Furness in northwestern England, London, and Toronto again before I turned ten. I began playing recorder as an eight-year-old at school in London. Apparently I jumped at the chance to play the same ?flute? that my Uncle Bill played.

?I loved being able to play music for myself, and had an eclectic bunch of favourite tunes, from English folk songs to an aria from Handel’s Judas Maccabeus. I started on flute in junior high school when I was back in Canada. As far as help and guidance along the path goes, there were many inestimable gifts of encouragement from my teachers at each step along the way.?

How does such a large group of maestros select what tunes It’s going to play?

?Various members of Polaris,? says Colin, ?work in genres ranging from historical performance of medieval, renaissance, and baroque music; to experimental electro-acoustic; to Celtic/folk; to contemporary classical ?art music?; to traditional music from the Middle East, Turkey, the Balkans and south Asia; to symphony orchestras.

?With such a wide variety of musical tastes and experiences, we’re always on the lookout for new material that would suit our aesthetic. Some members bring folk tunes from traditional sources (aural or written collections), some of us write original music for the band, and others arrange tunes from the diverse sources listed above. Often the arrangements are a collective enterprise, with a lot of experimentation and subtle adjustments over time until we feel we’ve found the right sound to convey the character of a given piece.?

How to Be in a Group

Says Alison: ?Playing with a good group is inspiring, challenging, and rewarding because it asks the most of you and can bring out your best. I once had a teacher who regularly said, ?Always strive to be the worst in your group,? which is a slightly odd way of describing the great opportunity you have when playing with colleagues you greatly admire and respect.

?Playing with Polaris is very much this kind of experience. Scheduling rehearsals and such can sometimes be a challenge because everyone has very busy lives, but we always manage. Playing with a group obviously requires more compromise than going it alone, but the old saying that ?The sum is greater than the parts? also applies.? 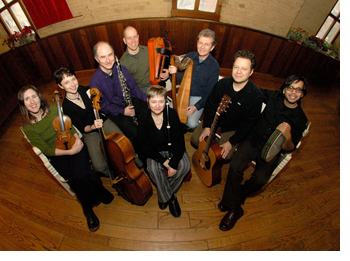