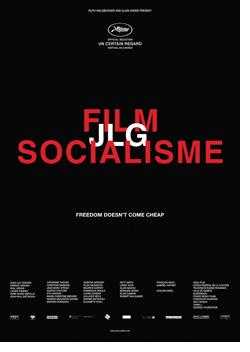 ?Globalisation has made us more vulnerable. It creates a world without borders, and makes us painfully aware of the limitations of our present instruments, and of politics, to meet its challenges.?

?I respectfully decline the invitation to join your hallucination.?

A Rhapsody of the Prosaic in a World of Hyper-Stimuli

A young girl wanders around the ship’s deck. She’s blindfolded and, holding her hands out before her, she feels her way through the space. She reaches the pool and gently allows herself to fall in. Two men at the slot machines discuss the international flow of money, mentioning Israel and Palestine. Patti Smith, playing herself, wanders among the ship’s guests, singing of angst and futility?perhaps the most incongruous cruise ship entertainer you could imagine.

The cruise ship is the ideal metaphor for globalization. People of all nationalities are on board, and their goal is not a resolution to their problems but rather a bourgeois decadent escapism, a means of processing the horror of their reality so as to render it palatable.

The cinematography is disarming: the churning sea is a splendid wall of water and you can observe the thoughts pacing across the lovely faces of those on deck contemplating it. The colours of the cruise ship are garish and industrial, the sights and sounds so vivid you can almost smell the sea breeze.

The route is bizarre; the cruise appears to start in France and to then to visit Egypt, Palestine (where It’s not allowed to dock), the Ukraine, Italy, and Spain. Each stop somehow illuminates the origins of European civilization and the current woes while at the same time providing a diversion from them.

Religion is connected to the world of conventional film, thus subjecting it to the same kind of mockery Godard has always reserved for the commercial and traditional aspects of the film industry. A Catholic mass, for example, is held in a monstrous casino. Hollywood, allegedly invented by Jews, is described as the tomb of the prophet; when we view the big screen we face a Mecca and pray toward an unseen Ka?abah.

We are off the ship now, possibly in Spain. A young European girl leans against the gas pumps, rebuffing those who try to speak to her. She’s engrossed in a paperback copy of Illusions Perdu, by Balzac, a book which tells the story of a young man who prostitutes his creativity for upward mobility and is then castigated on all sides, leading him into even worse acts of betrayal.

The characters? resistance to reality creates a delicious tension. A twisting thread emerges, creating not a commentary on the world we now inhabit but rather a light which shines on a few key formative events, both mythological and historical: Abraham and Isaac, ancient Egypt, Athens, the Crusades, and the Holocaust. The burden of guilt is more than Europe can bear. There remains distraction and depression wrapped in a hideous beauty. Again the world revolves around Palestine; in typical Godard fashion, no side is taken.

Godard has a penchant for breaking moulds imposed by traditional French cinema and by Hollywood, and this alone makes for some charming surprises. Instead of the expected English subtitles, very brief collections of words (usually three) at the bottom of screen provide a restrained verbal dimension indicating the thoughts of the characters. Later, when people start speaking, a very general indication of what the French is saying is given. The dialogue itself is like spoken poetry, cryptic iambic fragments spoken with an air both tragic and blasé.

Old film clips and cultural references are as brief as autumn snowflakes, but effective. ?don’t say it, show it,? admonishes an androgynous-looking female director within the film, pointing to the limitations of language for expressing reality.

There are countless achingly everyday visual details, like the shade of yellow paint on a garage interior, a young girl’s sullen, vacant look, and a little towheaded boy, wielding a stick with the bravado of Quixote, tellingly accompanied by a jazz track.

On The Red Green Show there was a character named Dalton Humphries who ran a junk store called The Everything Store. The store’s typically passive Canadian motto was this: ?We got stuff. Maybe buy some.?

A similar slogan could be attributed to Film Socialisme: ?Here it is. Have a look.?