In August 1896, a small party went prospecting on Rabbit Creek, a tributary of the Klondike River. Their discovery that day turned Yukon into a hotbed of gold fever, and stampeders by the thousands poured into the area. Some got rich while others went home empty-handed, and the Yukon still exists in popular imagination as the land of grizzled prospectors. But there’s a lot more to the territory than that, as I recently discovered.

In many ways, the long-ago Yukon of gold and glory still exists?and It’s alive in a saying I heard countless times during my stay. ?Everyone here is from somewhere else? went the refrain, and it echoed the adventurous spirit that brought so many here from far-flung lands.

Not that the locals I met had ventured north in search of gold. In fact, a common theme was that most had only planned to stay in the Yukon temporarily, some for work, others for a holiday. Yet almost without fail they would smile and say they’d fallen in love with the place, and twenty (or five or a dozen) years later they couldn’t imagine leaving. Whether they hailed from Ireland or the Philippines or simply another part of Canada, they were part of the surprisingly cosmopolitan feel of this rugged place.

That international flavour was especially visible during the 2012 Arctic Winter Games. The Games are a ?celebration of northern sport, culture and friendship,? and team jackets from around the globe dotted the streets of Whitehorse, which hosted this year’s event. Greenland, Nunavut, Yamal (Russia), Alaska, Nunavik-Quebec?athletes from all these places and more came together to compete at the Games.

And the lure of the Yukon had carried newcomers well beyond the capital of Whitehorse, even though three quarters of the territory’s population lives there. One of the highlights of our trip was a little gem called the Kluane Kaffee, an unassuming little spot tucked just off the highway in Haines Junction. The café’s owner, Matthias Lexow, hails from Germany and the chef, Jonathon Peterson, trained in Rhode Island. For customers, It’s a match made in heaven.

From the moment you step in the door, It’s clear You’re in for a treat. Fresh-baked organic muffins, flaky croissants, and decadent desserts fill the display, while the sounds of world music stream in from the Internet (at a volume That’s blessedly low enough for normal conversation but loud enough to set the mood).

And the food? An absolute delight, from the organic coffee to the perfect latte to the steak that my companion is still raving about. Even in metropolitan centres It’s rare to find the quality of ingredients and the care in preparation that we discovered at the Kluane Kaffee. I’m no foodie, but It’s one of the first stops I’ll make if I’m in the area again.

For the icing on the cake, though, Kluane National Park tops it all. If you’ve never heard of it, Kluane lies in the southwest corner of the territory. The official version, on the Parks Canada website, goes like this: Kluane is ?an empire of mountains and ice. Here in a vast international preserve, are most of the tallest peaks in North America and the largest icefields outside the polar caps.?

The unofficial version defies description. The experience was, quite literally, like driving through a postcard, and the jagged mountain peaks looked as if some giant artist had done a charcoal sketch against the sky.

If you plan to visit the area, though, I’d recommend going in summer or early fall. Even in mid-March the roads were treacherously icy, and we passed few other travellers on the long stretch between Whitehorse and Fairbanks, Alaska. Definitely not the place to break down?or to run into one of the many sheep or bison that wander onto the road.

Yet for all the grandeur of Yukon there were sad reminders of boom days long past, too; reminders that were visible in the countless vacant hotels and gas stations along the highway. With many stores and attractions closed to await tourist season, we assumed at first that these shuttered buildings would reopen with the spring thaw. But many of them had a noticeably derelict look?nothing a coat of paint was going to fix.

After we’d asked, the answer seemed obvious. The Alaska Highway was constructed in the early 1940s by the US Army, in part to protect the Pacific Northwest from invasion during World War II. (This site even has videos of those early days!) The highway remains a major route between British Columbia and Alaska, cutting through southwest Yukon, so we were surprised that business wasn’t booming for restaurants and gas stations.

But if technology’s improved the highway since the ?40s, It’s improved cars, too, and the simple answer is that today’s vehicles travel farther and with fewer breakdowns. No need to stop when You’re zipping along with your enhanced fuel economy and GPS. 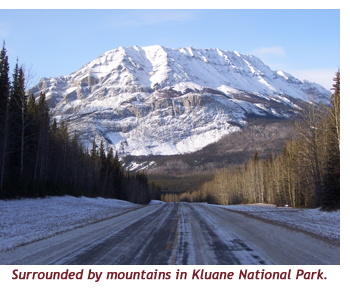 At least one icon of those days is flourishing, though, and if you visit Watson Lake, Yukon, you can add to its story. It’s the Sign Post Forest, a colourful forest of?well, signs. Visitors from all over the world add license plates, county signs, and even Frisbees to the posts. Anything that proclaims the place they’re from. The Forest started with a lone marker pointing to Danville, Illinois, erected by a homesick young engineer in the US Army.

You could wander for days and not read all the signs, and the park even has some of the original vehicles used to build the Alaska Highway. And if you happen to be visiting in 2042, make sure You’re there when they open the time capsule That’s been buried since 1992!

These days, most travellers don’t go to Yukon with dreams of gold on their mind. But with its modern highways, natural beauty, and thriving capital, it has plenty of treasures to discover.