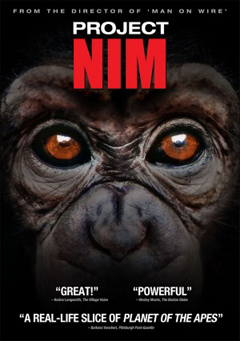 ?The insufferable arrogance of human beings to think that Nature was made solely for their benefit, as if it was conceivable that the sun had been set afire merely to ripen men’s apples and head their cabbages.?

How do you make a sociopath? Take him away from his mom too early, have him adopted by a family of rich, hedonistic hippies who don’t believe in saying ?no,? and let him do what he wants?then take him away from that family and subject him to intensive language training in a sterile laboratory. Every time he becomes deeply attached to a parental figure, take that figure away. Isolate him for extended periods in a cage. Keep him from his own kind and let him think he’s something he’s not. When he no longer serves your purposes and starts acting out the behaviours that are the logical result of the treatment you’ve given him, use him for medical experiments.

But what could possibly justify subjecting someone to this kind of life? This goal: to scientifically determine the likelihood of being able to plumb the intellect of a fellow primate.

Nim Chimpsky was a chimpanzee born in 1973. The name is ironic given that behavioural psychologist Herbert S. Terrace’s experiment with Nim was attempting to challenge Noam Chomksy’s theory that only humans could learn language. A similar experiment had been conducted with the chimp Washoe and with much better results, but both experiments failed to produce evidence that chimps were capable of communicating in language. Neither chimp had been able to effectively use syntax to express meaning in sentences; although they were able to construct simple sentences, they were unable to change word order to express specific meanings (e.g., they could not distinguish between ?you pick me up? and ?me pick you up?).

Nim is the star of his own life, his every need catered to, his whims indulged. He doesn’t know that he’s part of an experiment in the same way that Jim Carrey’s character in The Truman Show doesn’t know that his life is an artificial staging of a kind of reality TV. When his expectations are severely let down, Nim is just as shocked and angry as is Truman when he discovers that his life is a sham.

Project Nim is a prime example of creative documentary, the digital equivalent of the kind of literary non-fiction espoused by Truman Capote; it organizes and presents the facts in such a way as to recount a moving story in a memorable way.

Why would a mindful artist benefit from watching this? As much as the history of Nim shows us that despite our common DNA, humans and chimps are fundamentally different, It’s impossible not to anthropomorphize. Nim has a kind of soul and his life is a kind of human tragedy. As mistaken as this may be, watching the story unfold is still an enlightening experience.

In the end, what we see from the story of Nim (as from the stories of Washoe and of Coco the gorilla) is that when we observe our fellow creatures we must never separate cognitive ability from emotion. The thing staring us in the face is the utter dependence of living things on the omnipresence of love and the natural readiness of all creatures to give and receive it.

Project Nim fulfills seven of the Mindful Bard’s criteria for films well worth seeing: 1) it is authentic, original, and delightful; 2) it poses and admirably responds to questions that have a direct bearing on my view of existence; 3) it stimulates my mind; 4) it is about attainment of the true self; 5) it inspires an awareness of the sanctity of creation; 6) it displays an engagement with and compassionate response to suffering; and 7) it makes me appreciate that life is a complex and rare phenomenon, making living a unique opportunity.