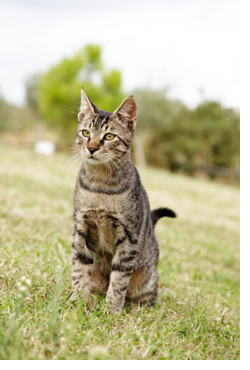 Ten years ago I was sitting on the patio of the Bay Street Bistro, having a celebratory lunch with my two daughters. We were marking the completion of another school year.

Our lives were about to change.

A young woman, her arms embracing a worn cardboard box, stops on the sidewalk and signals to us by waving her hand at my girls. The woman tips the box forward to display its contents. Inside are four balls of mewing fur.

Before I can say no, the girls bolt from the table. An emaciated creature is held up for my inspection, followed by a chorus of ?Please, pleease, pleeeease!? I acquiesce easily. I hand over a $10 bill to this strange salesperson and tuck our new acquisition inside my jacket’s voluminous inside pocket.

My wife meets her tribe at the front door, where the kitten is placed into her hands for examination. She then draws me aside and with tight-lipped skepticism says, ?That poor creature won’t make it through the night.?

The next morning I find my spouse at the kitchen table. She’s feeding the kitten warm milk through an eye dropper?a vigil she’d maintained for eight hours. With a smile she informs me that with a little loving care, the tabby will be fine.

The children soon hurry downstairs and a conference is convened; our newest family member needs a name. My oldest child has just read this passage from A Clockwork Orange: ?Come and get one in the yarbles, if you have any yarbles, you eunuch thou!? But while Yarbles is a humorous and creative proposal, it doesn’t seem appropriate for a defenceless creature not yet neutered. Mother recommends Bubba, and when she speaks the kitten utters a tremulous meow.

Bubba spends the first day exploring his new territory, moving around on wobbly legs. As his strength increases, he roams further afield. Our house is reached by entering a long, narrow street that ends in a bubble-shaped court. The children had christened the street King’s Court, naming it for the oldest and first resident to welcome the family. The houses that circle King’s Court back onto cultivated parkland, an ideal location for children and pets.

By the time Bubba is a year old he has claimed territorial dominion over King’s Court. His light green eyes track the neighbours? comings and goings. He’s an aggressive defender against nonhuman intruders, and his scarred, torn ears are a testimony to his vigilant attentiveness. Bubba has too much pride to back away from trespassers. He challenges his opponents head on and refuses to turn and run when outmatched. Bubba takes several trips to the veterinary office every year to receive stitches and antibiotics. On one memorable occasion I have to separate him from an altercation with a raccoon. Even I am apprehensive about getting too close?a raccoon is a fierce foe and I know better than to mess with one That’s in fight mode. I solve my dilemma by spraying both combatants with hose water. Better a wet cat than a dead one.

Last year, Bubba disappeared. I visited the animal shelter every evening and wandered the streets, calling his name. A week passed and I had reconciled myself to the fact that Bubba wouldn’t be returning, and worse, that I would never know why. Admittedly, I was heartbroken. Then, waking up on Saturday morning, I found Bubba sprawled across my legs. My spouse had heard him calling at the patio door during the night and let him in. Under normal conditions, he’s barred from the bedroom. I suspect my wife’s generous act was as much for my benefit as for Bubba?s.

I work from my home performing freelance tasks for various local businesses. A large mahogany desk sits in front of a ground floor bay window with a wide sill that provides Bubba with a sentinel’s outpost from which to view his Court. While I’m occupied at my desk, he spends the time observing his protectorate, preening his fur, or dreaming. I know he dreams, because his tail tip twitches, his ears jerk back and forth, and low growls rumble in his throat. Perhaps he’s reliving the standoff with the raccoon. When he wants a diversion, tracking the cursor on my computer monitor becomes an interesting pastime.

I welcome Bubba’s companionship, and he demands mine. He will push his way into the bedroom when I sleep late, hopping onto the bed and gives me a head butt. It’s like he’s trying to say, ?I know It’s Sunday and you can remain beneath the covers if you want, but breakfast was due an hour ago.?

Or when I’m in the office and my focus is elsewhere, he nips my ankle to get attention. However, I am accustomed to his belligerence and don’t take his painful reminders personally.

My friend the cat is beginning to exhibit signs that he’s aging. His left hip is stiff and some days he needs help climbing the stairs. He’s content to remain indoors now, and shuns all but the mildest days. I note a new element of caution in his approach to King’s Court invaders. He’s taken to treating them with disdain, but occasionally his old nature exerts itself and a trip to the veterinary clinic is the result. The vet assures me that Bubba’s general health is good despite the rheumatic hip. He may be slower than he was a year ago, but the heart of a lion still beats in his chest.

As I write these words, Bubba is curled up on the window sill. His purr fills the office as he indulges in an afternoon nap.

Bubba cost me ten dollars ten years ago. Today, I wouldn’t trade him for all the gold in the world. 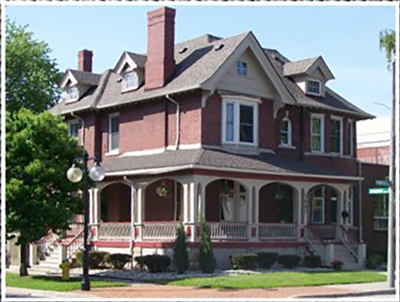 From My Perspective – Giving Thanks and Death