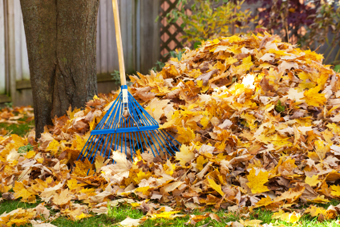 ?Mom!? My eight-year-old daughter’s dulcet tones ring out and she gallops down the hill toward the stream that flows behind our home. I nod, murmuring something that sounds like a question. My back is to the water as I shovel pollen-covered mouldy leaves into a trash bag. ?I need to grab an airplane-shaped rock for Ben.?

I grunt and climb over a tree stump. My three children are painting rocks in the driveway. A blur of motion, Madeline sprints past me, clutching a handful of rocks for her two brothers. She doesn’t see me smile but she probably hears it in my voice as I reply, ?That’s a good thought.?

Several years ago, my husband and I went house hunting in early April, and as I took in the view of the backyard from the home we live in now, I knew we belonged here. It is not an unusual house. My husband calls our Dutch Colonial a ?five, four, and a door.? This phrase describes the view of the house from the road that runs by it. There are five windows on the second floor, and below that stand four more windows and the front door. Since we moved here, the green shutters have faded, two more children have been born, and time has written more lines upon my face.

The backyard, however, looks unchanged. Our ?five, four, and a door? sits at the top of a steep hill that forms a thrilling sled run in winter. Riding this hill on snow or ice requires nerve and skill. Take a wrong turn and you will slam into one of the many pen-oaks or maple trees that turn the sled run into more of a slalom course. One year, my husband broke his finger after he lost control of his blue plastic ?hill-runner? and bashed into one of the smaller trees. We still laugh about it.

The first time I raked in the back, I gazed up at the mass of bright yellow leaves still clinging to the trees in October and I gushed to my neighbour, Cheryl, ?Is it crazy that I love to rake my leaves??

She shook her head and sighed, arms akimbo. ?You won’t feel like that after you’ve done it a few times,? she warned me. ?It takes dozens of bags to clear the back.? She went on, a voice of yardwork doom, complaining about her sore back and the uncontrollable weeds. I tuned her out and grinned at the blanket of leaves that covered the ground. When I think of that yellow blanket, I think of my middle child, a November baby. When we left for the hospital, the leaves still sat on tree branches, but by the time we returned home with our blue-eyed boy, all the leaves had fallen. Whenever I see a yellow leaf, I think of little Jim and the year I missed watching the leaves fall.

Seven years later, Jim sidles up to me and watches me work. First I rake a small pile. Then I shake the bag open in the quick, jerking motion that I learned flipping burgers many years ago. Ignoring the sore back that Cheryl warned me about, I kneel my 40-year-old runner’s body down and shovel the mushy old leaves from the bottom of the pile. I stand up and grab a massive handful of dry leaves from the top like an elf filling Santa’s toy sack.

Each spring, we fill 75 bags full of leaves, and this year has been no different. It is a cool April day and light green pollen wormlets create a lace-like effect when they mix with the russet and brown leaves and tree branches. These will be the last bags I fill until October. My husband argues each year that we live in the woods and that we should let the leaves lie where they fall. Maybe he is right. I honour and value this good earth, but I somehow feel that whoever laid the foundation for our house altered the land in a permanent way 40 years ago.

?All landowners alter their environment in some way,? I think as I wipe my brow with my wrist. I love our property. Through it I feel connected to generations of my American immigrant relatives, brave pioneers who claimed a small slice of their own and tended it for the good of their families. With a rake in hand, I am changing my land just like my Irish, German, and Polish forebears tilled their own soil so many decades ago.

I suspect that a deeper, inchoate need fuels me when I rake and bag leaves: a sense that by tending to and ?improving? my land, I am nourishing it. Our third of an acre with its steep, sloping hill is nothing special in the grand scheme of things. But it is ours, and I have made it my sacred duty to care for it.

After he finishes painting rocks, my youngest son skids in next to me. ?Mama, can I eat some cake?? He shouts when he should have whispered.

I shake my head. ?No.? He whines and tugs at me, and the rake falls toward my face. He jumps in front of it and knocks it aside, then darts off as quickly as he came. As I turn back to my work, I marvel at the gentle way in which he nurtures me, too.