Features
The Voice
Editorial – The Winning Side 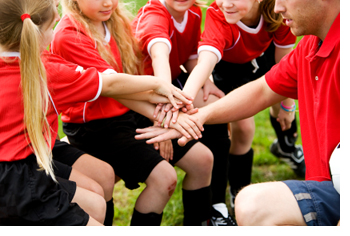 Failure. Losing. Taking second place. However you want to style it, not measuring up to the competition, whether real or imagined, is never a pleasant experience. Whether It’s a youth hockey game or the summer Olympics, the honour roll in elementary school or the coveted promotion at work, it hurts when you don’t make the cut.

And That’s not a bad thing?though you’d think otherwise, given a recent and controversial decision by Sport Canada. Sport Canada, which sets policy for all of the national youth sporting leagues, is setting out to drastically change the face and focus of youth sports.

The plan, which affects regional sports organizations across the country, proposes to ban all competition from sports for younger ages. Instead of competitions or tournaments, there will be sports ?festivals? in which team lines will be blurred and scoring will be banned.

The thought behind it is good: reduce pressure on kids to allow them to become more creative and have more fun. Creativity and fun are good things. But while hyper-competitive soccer parents and coaches don’t help anyone, removing competition as a whole isn’t the answer, either. In fact, learning to deal with competition?particularly its pressures and the inevitable failure that often accompanies it?is central to human development. And It’s good for both fun and creativity.

First, healthy competition is crucial if we want a future full of strong, decision-making adults who can roll with the ups and downs of life rather than falling apart when something doesn’t go their way. Sure, it can be painful. Sure, losing sucks and talking about it makes it worse sometimes. But that doesn’t mean It’s not a valuable life experience. Learning to cope with the pain now makes a lot more sense than trying to figure it all out during adulthood, where the stakes are a lot higher than the regional soccer title.

Second, the structure of competition aids rather than hurts our chances at creative thought. Operating on a whim is scattered at best, and without the discipline of some kind of rules creativity can quickly become chaos. On the other hand, competition creates the structure in which creativity can best flourish. All the fluid thought in the world will never deepen past the superficial or theoretical unless It’s gently nudged, corralled, and channelled within some form of structure.

Third, the implication that creativity is a good enough substitute for skill just seems foolish. After all, all the clever strategies in the world won’t negate the necessity of practice, practice, practice. While It’s good to have fun, attitudes that value fun far above hard work make true innovation impossible. This is a worrisome trend.

Surprisingly, for some kids?and adults?competition can actually be part of the fun. There’s a certain thrill that comes with being forced to pull out all the stops. While it might be stressful, It’s important to have the opportunity to experience the burst of adrenaline, the one that unleashes the creative spark which can often lie hidden behind fear or even mediocrity.

Yes, I did say competition begets creativity, and That’s the fourth reason competition shouldn’t be phased out of youth sports, or any activities or academics.

Competition forces us of our comfort zone. Why bother earning the A if the C will get you just as far in life? Why perfect your shot or your dance technique if everyone’s is equally valued? It’s when we’re required to up our game to pass the rest of the pack that we reach into our most innovative and creative side.

Sport Canada is trying to encourage creativity by diminishing or rejecting competition, but It’s creating an artificial divide between two concepts that are deeply linked. Certainly, some kind of reform of kids? sports may be in order. Rather than throwing out the whole system though, the link between healthy competition and creativity might be explored a bit more closely, with different reforms introduced.

That way, kids can have a chance at fun?and yet still learn the ability to unleash creative genius within the competitive world that will someday be theirs.

The Good Life – A Simple Act