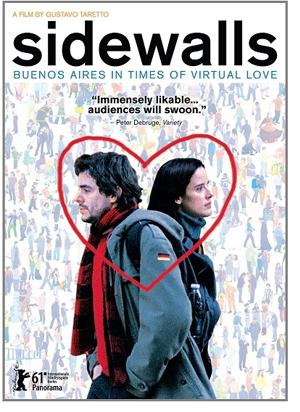 ??Suppose further,? Socrates says, ?that the man was compelled to look at the fire: wouldn’t he be struck blind and try to turn his gaze back toward the shadows, as toward what he can see clearly and hold to be real???

Many of the windowless sides of the high rises in Buenos Aires exhibit tiny windows in odd places. Mariana and Martin, strangers to each other, both notice the phenomenon and realize that tenants are having windows discreetly cut out of their little shoebox apartments to let the light in. They do likewise, hiring carpenters to carve square holes into their walls and make them into real windows. On the exterior these show up in weird places?at the end of an arrow, for example, or as the eye in a picture of a face?and serve as potent symbols for getting out of the box.

The decision to make windows at the same time is not really due to karma or fate. When we find our soulmates It’s not just because some invisible yet powerful and transcendent force has manipulated our paths so that they cross each other at just the right moment; It’s also because we make a conscious decision to grow up and lay aside the fears, delusions, and petty addictions that have sprouted up to form the thick hedges that stand between ourselves and the terrifying blessedness of reality.

we’re introduced to this reality by means of a little tour of the buildings of Buenos Aires, the typical modern city on a plate. Architecture and technology and even all things manmade are examined as metaphors for the divided nature of postmodern humanity?we are divided from ourselves and within ourselves. Our world of connectivity draws us together while making real relationships nearly impossible.

Martin and Mariana have reacted to this alienation by developing phobias: Martin fears open spaces and Mariana, heights and crowds.

Because of this fear of crowds Mariana is fascinated by the Where’s Waldo books. Searching for that red and white striped sweater in those packed public spaces is as thrilling for her as ghost stories around a midnight campfire.

In spite of their emotional and psychological problems Martin and Mariana retain an existential dignity that places them on a path of redemption; they will not accept things as they are, and keep looking for a way out. When the same old ways don’t work they begin to jettison the useless baggage of their lives in the hope that their ship might sail a little faster toward release from the pseudo-reality that traps them.

Frightened of the red pill, they’re still not content with the blue pill, and attempts to live within their own personal matrices just keep breaking their hearts.

I’m a little puzzled by the critics who didn’t seem to get the subtleties of this well crafted, well acted, and vibrantly directed piece and dismissed it as just another saga of postmodern alienation and Internet romance. Even the Where’s Waldo motif is dissed as a gimmick when in fact It’s a brilliant metaphor for the threat of loss of the true self.

Sidewalls is a deeply cynical film with a surprisingly lighthearted and optimistic ending, and in between is a kind of roadmap to wholeness.

Sidewalls fulfills eight of the Mindful Bard’s criteria for films well worth seeing: 1) it is authentic, original, and delightful; 2) it poses and admirably responds to questions that have a direct bearing on my view of existence; 3) it stimulates my mind; 4) it provides respite from a sick and cruel world, a respite enabling me to renew myself for a return to mindful artistic endeavour; 5) it is about attainment of the true self; 6) it inspires an awareness of the sanctity of creation; 7) it displays an engagement with and compassionate response to suffering; and 8) it makes me appreciate that life is a complex and rare phenomenon, making living a unique opportunity.