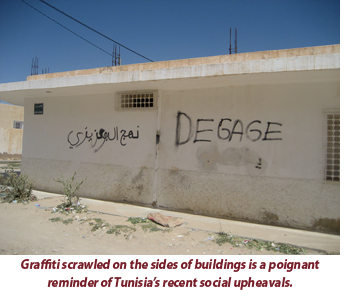 Recently Wanda Waterman spent several weeks in Tunisia, where she crossed half the country, visited several cities and villages, and stayed with a traditional Tunisian family. This travelogue series chronicles her adventures and experiences in the Maghreb. Read Part I of the series here.

?The silent onlookers, those whose only concern is to protect their political or economic interests, will be left with their shame. Whether the uprising ends in success or failure, its principles?resistance to the dictatorship and exposing its supporters (dictators, democrats and/or hypocrites)?will not disappear.?

Gafsa, where my hosts live, is the subject of a warning in this travel advisory from the Canadian Department of Foreign Affairs: ?Canadians should carefully plan any travel in the southern regions of Tunisia, especially along the Libyan and Algerian borders, as regional tensions increase the risk of terrorism or exposure to other disturbances. Social tensions are reported especially in the Gafsa and Sidi Bouzid regions.?

Is Gafsa dangerous? Perhaps my view is too rosy?after all, I’m the guest of a Tunisian family that is taking great pains to shield me from the uncertainties of the tourist’s journey?but I can’t say I’ve felt safer anywhere. To me, it feels as though a day of social unrest in Gafsa is still less perilous than an average day in any large American city.

Writing on the Wall

And the social unrest is now focussed and deliberate. The Jasmine Revolution echoes in graffiti that proclaims Degage (?Get out of here,? the word aimed like an Uzi at the head of former dictator Ben Ali). Beside it in Arabic is the name of Mohamed Bouazizi, the Sidi Bouzid vegetable vendor who died in December 2010 as a result of burns sustained after he set himself alight to protest humiliating actions taken against him by police. His death was the catalyst for the weeks of intense countrywide protests that eventually succeeded in driving Ben Ali and much of his family from the country in January 2011.

Now, though, there’s the sense that It’s time to buckle down. Tunisia is experiencing the growing pains of uncertain change coupled with a general determination to build a just society. The politically engaged, especially the youth, are optimistic and savvy, and I have an excellent discussion, for example, with a young man about the necessity of good labour laws.

But the yearning for justice sometimes conflicts with years of habituation to the kind of survival mode economics that rationalize dishonesty in business relations. I see this on a small scale in the markets, where the vendors stand at the openings of their kiosks and implore, Madame, achetez! but hang their heads when they see that I’m in the company of Arabs. Stronger than the Arab merchant’s wish to profit from Western tourists is the Arab host’s determination that his guests will not be cheated.

There are daily demonstrations, but none erupt into violence and some can even be hard to spot. One day we’re walking through a small park in Gafsa, and we see one man masterfully strumming an oud and singing while another plays a derbouka. A polite and attentive audience surrounds them. Afterward my friend informs me that we’ve just walked through a labour demonstration. I hadn’t even noticed.

There’s some cause to be anxious, but among the citizenry the fear of the police is greater than that of the rioting mob. For example, in the capital I ask to photograph the huge coils of barbed wire surrounding the government buildings and am soundly lectured. Yes, a crowd can become rowdy, but they’re usually unarmed; the police are not only armed, but also have a tendency to be a bit?well?knee-jerk in their reactions.

The vigilance is still palpable. In a café I overhear a man talking on his cell phone, saying that there’s a female Canadian journalist in town taking photographs. I’d love to know if the receiver interprets this as good news or bad. 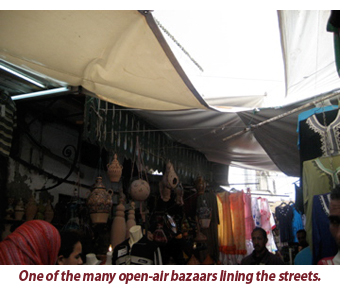 Seven Days of Feasting and Fun

Despite all the uncertainty, community life continues to roll along with traditions as ancient as quartz, seemingly untouched by the vicissitudes of political change.

One of the most important events in Tunisian life is the wedding, a major event calling for months of preparation and a huge chunk of change. The traditional wedding takes seven days, the first three days being a henna party during which the bride and any other women who wish it get henna stained onto their hands and feet as well as temporary ink tattoos.

We enter a large house to mezwed music played to a driving beat. It’s a large courtyard with black and white tiles and a starry sky for a ceiling. Our party of women is ushered into a little room, where we’re offered couscous, makrouts (a regional delicacy?a cookie flavoured with orange blossom water), and soda.

Afterward we go to sit on molded plastic chairs near the dance floor. The men remain chatting at tables outside the house or just inside the doorway. Only women are dancing. The women range in age from four years old to eighty, all actively engaged in the most sensual dance I’ve ever seen, raising their twirling hands in the air and freely swinging their hips to the driving rhythm. I’d thought of this as a relatively prudish society, having forgotten how one society is prudish where another is uninhibited. Eventually they drag me up to the floor and there I am, dancing like a white girl among the swaying odalisques. I’ve never felt more like Miss Jane Hathaway.

The most glorious of them all is a hefty elderly woman swathed from head to toe in traditional Arab vestments. Her hands held high, her smiling face lifted to the sky, she freely moves her hips in an exultant affirmation of life. Later at home I demonstrate her dance for my hosts, and from then on every time someone visits the house they insist, Show them how the grandmother danced! And laugh uproariously when I comply. 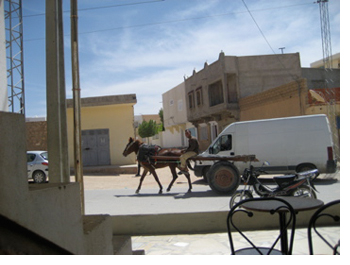