?The new world is as yet behind the veil of destiny.
In my eyes, however, its dawn has been unveiled.?

Marching to the Beat of a Different Derbouka

Noor Noor broke three drumsticks playing in Tahrir Square during the protests last year. And by ?playing,? I mean he was motivating other musicians in a marathon of skin-pounding he calls ?freedom beats,? designed to sustain the enthusiasm of the protestors for as long as possible. He kept right on smiling despite the pain in his hands.

Noor drums in a number of bands in Cairo, including El-Zabalee. I’m amazed at the similarities between this band and my favourite Brazilian group, Conjunto Roque Moreira. For one thing, they both make many of their instruments from recycled materials. For another, they eschew the aping of externally imposed commercial superstars in favour of the music of their own region. They value innovation over imitation, originality over conformity, and freedom over safety.

I’m also amazed at the similarities between the changes in the music economy being made in Egypt and those emerging in Canada; a tremendous amount of cleverness is now being channelled into rejecting the conventional star-maker machinery that rarely succeeds in promoting cultural development. Musicians themselves are coming up with ways in which they and their fellow musicians can make at least a modest living, as opposed to a system in which a chosen few get all the golden stars.

The models are different, based on the exigencies of the moment and the cultural and societal contexts, but the will is there to forge a new world of music. It may be less sensational, but it is more innovative and truer to the real needs of real artists, whose most urgent desire tends to be to continue to do what they love.

What role does the Egyptian Revolution play in all of this?

The musicians? commitment to freedom is nothing new. Although media reports have suggested that the revolution changed the way musicians thought about music and encouraged alternative forms and political subjects, the opposite is true. In fact, alternative forms, a love of freedom, and political lyrics predated the revolution by decades and provided the cultural impetus to launch it and keep it alive.

The difference now is that the audience for such music has expanded greatly as media coverage of alternative bands and performers has become more common and enthusiastic. Those who wish to support homegrown music and creative freedom aren’t weirdoes and saboteurs anymore?they’re the trendsetters. There are fewer, if any, repercussions for singing openly about the need for justice and equality or for criticizing the establishment.

The new Cairo music scene showcases local musical traditions that blend in foreign genres. One example is mahragan (?festival music?), which is also called electro-sha?bi. Sha?bi originated in Algeria and developed separate traditions all over North Africa. It’s popular at weddings, with its hard, driving rhythms and ecstatic and loud delivery. This tradition is always in flux, and international elements are constantly being added to it, lending it vibrancy and relevance.

Taqwacore, the name for Muslim punk, originally had a presence all over the world (including North America). Now It’s faded a little into the background, but this tends to happen when societies open up and become more democratic (punk in the US had its heyday during the Reagan years).

Since 2006 the annual SOS Music Festival, the brainchild of Cairo jazz guitarist Ousso, has been providing free admission to audiences of 15,000 for eight hours of superlative performances by acts carefully chosen for their willingness to keep it real. Because the musicians are there to promote themselves and each other, they share resources like equipment and technical skills and services. Homegrown acts play alongside bands from other Middle Eastern countries, and reggae, rock, and jazz are was right up there with rai and sha?bi.

The new music horizon is no bed of roses. There is still uncertainty and a lack of resources, along with the perennial temptation to sell out. Worse, there is no music education in public schools, even though It’s been proven that arts education enhances academic performance in all areas. There’s also a lack of infrastructure to support alternative music. But judging by the ingenuity demonstrated by dedicated music activists, this is all changing.

These are just a few musicians and bands to check out on YouTube: 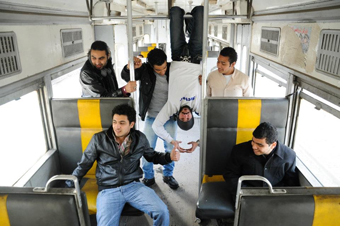