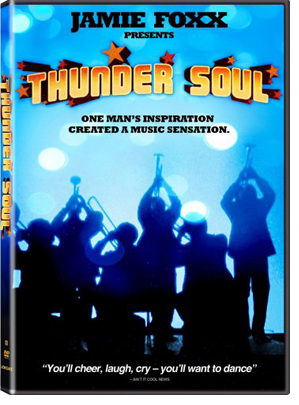 ?Should we not be putting all our emphasis on reading, writing, and math? The ‘back-to-basics curricula,’ while it has merit, ignores the most urgent void in our present system?absence of self-discipline. The arts, inspiring? indeed requiring?self-discipline, may be more ‘basic’ to our nation’s survival than traditional credit courses. Presently we are spending 29 times more on science than on the arts, and the result so far is worldwide intellectual embarrassment.?

A Studied Manifestation of Unconditional Joy

In some of the old film clips in this movie it really is wonderful to see the young Thunder Soul musicians gliding through European streets in their afros and bell-bottoms, followed by clusters of adoring hippies. These kids, whose destinies had dictated falling through economic cracks and smashing up against societal obstacles, were now elevated to a position of grandeur?and it looked good on ?em.

In the early 1970s, Conrad O. Johnson??Prof? to his students?got the urge to try to turn a high school band into a professional stage band. Why? That’s just the kind of guy Prof was: motivated, proud, resilient, and bodacious. Would that every artist could have a mentor like him, for it would mean no more dull or mediocre performances.

The Kashmere High School Stage Band of Kashmere, Texas was made up of young amateurs, but this was no deterrent to their creating incredible jazz, funk, and rhythm and blues. Nor was the fact that they were black musicians in the ?70s; surprisingly, racism wasn’t the thing that posed the ultimate threat to the band’s survival.

Poor access to economic and academic resources didn’t stop them either, at least not at first. In fact, the elements that saved these young people from the tragic lives that mainstream society had determined for them were elements within their own community, resources that only other African Americans could provide.

Shockingly, the biggest threat to the band’s survival was not economics or prejudice, but rather the narrow ideas of what constituted education.

The high school’s previous administration was so delighted to have such a great group bringing acclaim to their school and community that they did everything they could to further the band’s mission. But then a new principal arrived on the scene. He thought of music education as a pointless luxury and seemed to feel that if the Kashmere Stage Band was all that, they should be footing their own bills. They hung on for a while, swallowing the slights and paying their own expenses, but after only a few years the Thunder Soul project came to an end.

But it left an amazing legacy, not just of great recordings but also a shining example of what was possible. Under Prof’s guidance, Thunder Soul showed the life-changing value of artistic discipline; no one could observe the development of these young people and claim that music education had no intellectual or social value.

When the Thunder Soul alumni were beginning rehearsals for their comeback performance (inspiring snippets of which are available on YouTube), they received the news that Prof had just suffered a heart attack. Far from slumping and pining for their beloved leader, the band played better than ever, blasting ecstatic tones into the air in jubilant defiance of their own sadness.

Thunder Soul manifests five of the Mindful Bard’s criteria for films well worth seeing: 1) it is authentic, original, and delightful; 2) it provides respite from a sick and cruel world, a respite enabling me to renew myself for a return to mindful artistic endeavour; 3) it is about attainment of the true self; 4) it inspires an awareness of the sanctity of creation, and 5) it makes me want to be a better artist.