Columns
The Voice
The Mindful Bard – And Everything Is Going Fine 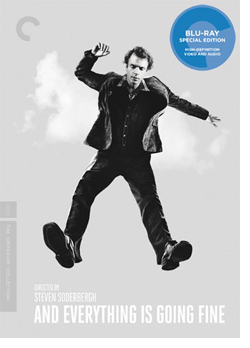 Film: And Everything is Going Fine (Washington Square Films 2012)

?Make no mistake about people who leap from burning windows . . . It’s not desiring the fall; It’s terror of the flames. And yet nobody down on the sidewalk, looking up and yelling ?don’t!? and ?Hang on!? can understand the jump. Not really. you’d have to have personally been trapped and felt flames to really understand a terror way beyond falling.?

Not With a Whimper, But a Bang

As the film begins, Spalding Gray, middle-aged now, is visiting his father and stepmother. Years before, his biological mom had suffered a long, slow, and tortuous nervous breakdown during which the young Spalding had so exhausted himself trying to save her that he’d finally gone away for a vacation. She committed suicide in his absence. This event forms the central theme of much of Gray’s work; It’s both the progenitor and the guiding light within the sense of chaos to which he so often refers.

?And everything is going fine except this particular day, It’s summer, and we’re eating outside, and the only problem is flies. There’s a fly, look out, a fly. Close the door, get out the bomber. My father got out this big fogger and set it off by the picnic table out back, and my stepmother, who collects antiques, got out the antique fly gun, and you pull it back like this, and you line it up a certain distance from the fly, and if You’re, if You’re all right, the thing goes . . . [makes noise]?

Spalding Gray made an artistic career out of long, minimalist stage performances that were essentially confessionals. Yes, in today’s cultural climate we are fair sick of this sort of thing; nonetheless, if done well, it can be one of the most effective vehicles for conveying the meaning and tenor of postmodern life. It has become our equivalent of Greek tragedy and has the same transformative power for individuals and society.

How did Gray make it work so well? How did he make his stage monologues so engaging, so entertaining? Ordinarily, listening to someone talk about himself is boring and irritating, and not just because It’s become so common in the arts and media these days.

But there’s just something about Spalding’s gentle face and voice, his timing (he’s dyslexic, which helps), his classic East-coast American accent, and his general air of openness and innocence. Perhaps if one had to pinpoint what really propels his monologues, it might be the trauma that informs everything; the fact of his mother’s suicide created a great convoluted knot that he spent his whole life trying to untangle, and an untangling such as this requires witnesses.

If illness is metaphor, as Susan Sontag suggested, what is the significance of the mentally ill mother? There are a number of cultural icons whose lives were scarred by the experience of growing up with a mother who was suffering from mental illness?R. Crumb, Allen Ginsberg, and Marilyn Monroe, to name a few?and their art was clearly affected by this experience. At the risk of minimizing the very real pain and suffering caused to children when the most important person in their lives is not quite all there, what does the archetype of the mad mother mean as a symbol of the existential condition?

Mental illness is one thing, but when a person upon whom one is heavily dependent is suffering from the condition, it feels like there’s no bottom to reality; anything can happen, and probably will. From moment to moment we’re never quite safe. This sense of essential insecurity is not just part of growing up with an unstable parent, but it often manifests in the artist’s deep dissatisfaction with the world, leading to the impulse to recreate it.

First, let’s ask where her illness originated. In ordinary life, we know That’s It’s an unlucky combination of heredity and environment that cook up just the right brain chemicals to push someone over the edge. However, in a work of art madness always means something: Someone or something is to blame and is now on trial.

I’m not going to trivialize this film’s achievement by suggesting that it blames anyone or puts a finger on a solution to either mental illness or socio-cultural dysfunction. Neither am I going to suggest that Spalding?or the filmmakers on his behalf?are trying to rationalize away his personal accountability. But his art as such points the way out of the forest, leading Hansel and Gretel safely away from the gingerbread sugar high.

Gray’s great achievement was how he used public performance as an opportunity for self-analysis, by asking the audience (standing in for the culture at large) to participate in his therapy. we’re not made to feel that as a society we broke it and now we have to fix it; rather, we’re simply the silent hearers whose listening facilitates his healing. we’re free to mull over what he says and to vicariously experience his pain and even to consider a cure, but are not given an opportunity to offer him solutions?he has a proper therapist for that?and so we’re spared a sense of guilt if things don’t go well for him.

Gray invites us to sift through mountains of words, not so much to find a solution as to place some level of order and meaning on the chaos of confession. We cannot let it simply fade out before we find some truth in it, leading to a fulfillment of T.S. Eliot’s pseudo-prophetic lines from his poem ?The Hollow Men?:

?This is the way the world ends
Not with a bang but a whimper.?

And Everything Is Going Fine manifests eight of the Mindful Bard’s criteria for films well worth seeing: 1) it poses and admirably responds to questions that have a direct bearing on my view of existence; 2) it is about attainment of the true self; 3) it inspires an awareness of the sanctity of creation; 4) it displays an engagement with and compassionate response to suffering; 5) it gives me artistic tools; 6) it makes me want to be a better artist; 7) it enables me to respond with compassion and efficacy to the suffering around me; and 8) it makes me appreciate that life is a complex and rare phenomenon, making living a unique opportunity.