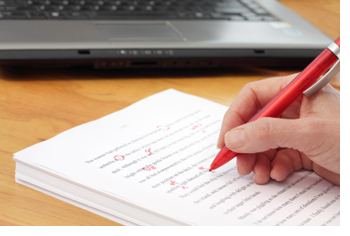 You write an essay. You proofread it, twice. But when you get it back from the prof, It’s marked up with all sorts of ?careless errors? and typos that you know you should have caught.

How could you have missed them?

It’s a phenomenon That’s caught the attention of linguists and experts in recent years, but back in the 19th century Mark Twain captured it best: ?You think you are reading proof, whereas you are merely reading your own mind; your statement of the thing is full of holes & vacancies but you don’t know it, because you are filling them from your mind as you go along.?

To get a bit more scientific, there’s a unique experiment, which the Medical Research Council Cognition and Brain Sciences Unit of the University of Cambridge describes here: if you scramble English words a certain way, they’ll still be readable as a whole, even if on their own they look like gobbledygook.

The meme itself is controversial, although scientists admit that we really don’t know just what happens in the brain when we read ?jsut? as ?just.? However, it does speak to a truth: When we read something, we tend to capture the bigger picture rather than the minutiae of words, essentially filling in these ?holes & vacancies? without even knowing it.

This means that we’ll automatically compensate for typos and errors as we read. It’s particularly a problem in our own work, where our mind already knows what the sentence or paragraph is trying to say.

So how to deal? Traditionally, writers have tried a number of methods to try to catch small errors before sending a document. Stepping away from the paper for a day or two?to distance yourself from the words you’ve written?is one way to freshen the way you read and review it. Getting a second person to review something you’ve written is even better.

Some proofreading experts recommend printing a hard copy rather than trying to review on a computer screen, as our brains scan pixels and print differently. My own favourite tactic is to take a day or two’s break from the writing, and then review it by reading it aloud, with expression. While I might sound a bit silly to the other people in the coffee shop, forcing myself to enunciate the words I’ve written is a huge help in discovering when I’ve made a typo, used a double word, or forgotten to delete something I’d changed earlier.

It’s probably impossible to catch every little error we’ll ever make, but the fewer we leave remaining, the more solid our writing will be. Try a few of these proofreading tips and find the one that works best for you.