Columns
The Voice
The Mindful Bard – The Sunset Limited 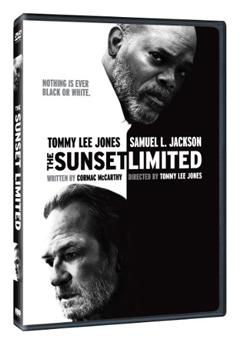 The Battleground of the Solitary Soul versus the Autonomous Mind

The central metaphor of Cormac McCarthy’s fiction is the frontier, the border, the boundary, the end, the last stop, and this film’s title is pregnant with a significance that begs to be plumbed by you, with your specific individual experience and worldview. But it won’t be easy?in the last decade It’s doubtful you’ve seen a film more profound than this one.

If you’ve ever nursed a friend or family member through a suicidal episode, you’ll know this: no matter how fresh and positive you start out, the strain of trying to talk your loved one out of committing the deed or even of just sitting there offering Rogerian unconditional positive regard is so draining and soul-destroying that after even a few hours you experience physical symptoms that suggest you might need therapy yourself.

Black’s rigorous spirituality and bounty of compassion compel him to accept the challenge of living among the sinful and destitute. He even seems a little grateful that life among junkies means there’s no point in owning anything. He shocks White with a gruesome prison story and White thanks him by refusing to accept Black’s faith in God and in brotherly love.

White scorns happiness, believing it to be the pathetic delusion of the simple-minded. If you’ve ever been depressed, you too have known the delusion that happiness is foolishness, and nothing convinces you of this more solidly than does despair. Black’s joy, on the other hand, is unconditional:

It’s actually the uneducated ex-con Black to whom McCarthy grants all the best arguments, and White is left only with the rock-hard certainty of his despair. (?The darker picture is always the correct one,? he claims with certainty). Again and again Black nails the intellectually superior White with faultless logic, but every time he does so White deflects him by changing the subject or by dismissing him with a sneer, reducing his opponent’s arguments to the status of opinion while maintaining that he himself has a firm handle on the truth.

White can’t argue with Black’s greater suffering, his miserable living conditions, and his assertion that if God could save him he can save anyone. White is left feeling shame that in his comfortable circumstances he’s discontented; his only excuse is an argument that keeps holding less and less water.

The scenario is gloomy and the scene is ugly, but nonetheless the cinematography is incredibly beautiful, the colour rich, muted, and evocative of the lovely essence of a bleak reality. And It’s quite something to see these two incredibly good actors sparring off in what appears to be a calculated imbalance of acting styles. Jackson comes across as natural but Tommy’s timing is always a bit off, his gestures and intonations self-conscious and wooden. Is this intentional? Even if not, it works, maybe because Jones is playing straight man to draw attention to Jackson’s phenomenal performance in this challenging and quite mesmerizing role.

In the end, what’s the answer to the question ?Why shouldn’t we kill ourselves?? ?Because he said not to,? declares Black. This opens the door to a whole realm of questions the mind can’t grasp.

Black doesn’t strive to understand God, since to him the existence of God is a given; rather he strives to discover what God wants from him. White believes in ?the primacy of the intellect,? but when he asserts with pride that he’s always gone his own way, he ironically backs it up by quoting Martin Luther’s famous ?Ich kann nicht anders? [I can do nothing else], Luther’s defense when tried for challenging the authority of the pope.

BLACK: [Reading from newspaper] ?The man’s last words as he hurtled toward the oncoming commuter train were, I am right!?

The Sunset Limited manifests nine of the Mindful Bard’s criteria for films well worth seeing: 1) it is authentic, original, and delightful; 2) it poses and admirably responds to questions that have a direct bearing on my view of existence; 3) it stimulates my mind; 4) it is about attainment of the true self; 5) it inspires an awareness of the sanctity of creation; 6) it displays an engagement with and compassionate response to suffering; 7) it makes me want to be a better artist; 8) it gives me tools of compassion, enabling me to respond with compassion and efficacy to the suffering around me; and 9) it makes me appreciate that life is a complex and rare phenomenon, making living a unique opportunity.