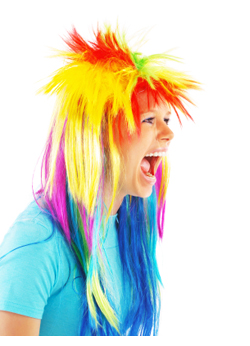 When I was a preteen, underachieving became cool. Well, not cool in the sense of failing out your classes (though I was labelled as a ?browner? and I never could tell whether it was supposed to be an insult). Rather, That’s when ripped jeans appeared on the in-crowd and kids sported tees emblazoned with the Bart Simpson motto: ?Underachiever?and proud of it, man.?

So I’m finding it amusing that, along with floral jeans and other questionable ?90s-era styles, we’re seeing a resurgence of proud slacking?with a modern, online twist.

It’s all about the underbrag.

Being ?real? is the in-thing these days. Facebook bragging is passé?not to mention annoying. The underbrag, according to this Atlantic Wire article, solves both problems: by underbragging ?you brag your own disaster or situation that one would not normally brag about.? In the process, you demonstrate ?both authenticity and enthusiasm. And power.?

And therein lies the dirty little secret of the underbrag: It’s a veiled brag, a loud proclamation of our innate security and openness, our willingness to share, our heartfelt persona, and our lack of dissemblance.

Showing that we’re true to ourselves, that we’re real and authentic, sounds simple in theory. Yet in practice It’s horribly complicated by the façade that we put up, even while we pretend transparency.

Mixing underbrags with the openness of online culture means we’re presenting our human side, or real selves if you will, to a much wider audience. And so we see it: I’m a slacker, I’m meh, I don’t really care. I do, but I’m me and I mess up and I’m good with it. I’m secure. I’m content. I’m an underachiever and?like Bart Simpson decades ago?proud of it, man.

The thing is, we cherry-pick our proud slacker underbrags, hiding the screw-ups that really hurt, the situations that we’re deeply embarrassed about. Common enough: ?I drove to the store and forgot my wallet,? or, on a larger scale, ?My kid got sent home from school for behaviour?again.? But do you ever see ?My partner doesn’t want to sleep with me because of my weight?? Is ?I have early-onset incontinence? a common status line? How about this imaginary Tweet: ?I cheated on my math test and wish I hadn’t.? ?I’m behind on my rent and don’t know which way to turn??

From a few brave or tortured souls, perhaps. But the majority of us hide what we’re truly ashamed of. In fact, sometimes it feels as though we throw up the underachiever mask to hide what’s really troubling us.

We want an image That’s human, imperfect, and ?real.? But when we try to share this reality, we simply can’t go all the way with our supposed authenticity. we’re imperfect, yes, but in a non-painful manner. It’s as carefully calculated as any amped-up profile or braggy Twitter feed?and in a way, It’s just as fake.

Because the irony is that underachieving, or seeming to underachieve, requires a calculated effort. As this blogger reminds us, it takes a whole lot of work to be low-maintenance. Perhaps even more, since it means wearing a mask both in public and in private. `

In the end, we’re only hurting ourselves if we self-medicate with the underachiever façade. Quasi-funny, quasi-pathetic self-deprecating status lines may make us feel human, but in reality they’re drawing us ever further from the authenticity we truly and deeply desire.

The Study Dude – Thank You for Arguing