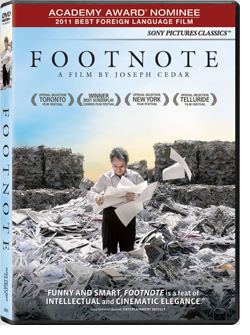 ?My Father had a profound influence on me. He was a lunatic.?

?. . . basically he’s trying to say this man is a sissy as opposed to the virile, strong Roman man with his iron helmet and cleated boots. He claims that Zionism changed the Jewish man from a feminine man to a macho man, which means the destruction of Jewish history.?

Guest at an induction ceremony at the start of Footnote

A Grumpy Dad, a Shiftless Lad, a Chance He Had

Josh, the aimless teenaged son of Uriel, son of Eliezer, is being lectured by his father: I’m so close to giving up on you. You know what it means when a father gives up on his son? . . . Giving up on you means that instead of wanting to help you before It’s too late, I want to see you suffer so that I can gloat.

The father-son relationships in this movie are, as this little scene attests, profoundly dysfunctional. we’re left to guess at the damaging repercussions of such relationships, to watch them unfold in all their horrific?and comedic?aspects.

The film opens at an award ceremony in which Uriel Shkolnik, thanks to his extensive contributions to Talmudic research, is being inducted into Israel’s Academy of Sciences. His antisocial father, Eliezer Shkolnik, sits beside him while he waits to be called to the podium to make his speech. Dad, looking every inch the pissed-off rival, is hilariously begrudging?he stops clapping after a few brief smacks and sits back down long, long before the audience is done applauding.

Dad stomps outside to sulk on a park bench but is annoyed by the sight and sound of a nearby man, Yehuda Grossman, who is talking loudly on his cellphone about the posh jet-setting week ahead. Eliezer returns to the museum but is stopped by the security guard. He’s unable to confess to the guard that he’s there to celebrate his son’s induction to an academy to which he himself has not been admitted, and is obviously miffed that the guard doesn’t know who he is.

Finally, Grossman returns to the building and officially recognizes Eliezer. But Eliezer doesn’t thank Grossman or even acknowledge him. Later, Grossman congratulates him on his son’s laurels while Eliezer stares silently at the ground at his feet. True, he’s jealous of his son’s success, but there’s another complicating factor: Yehuda Grossman is a successful and influential scholar who once pulled the career rug out from under Eliezer’s pedantic feet.

Is Eliezer autistic, as Uriel’s wife suggests in a moment of anger? He certainly fits the stereotype of the eccentric professor. He appears withdrawn and unresponsive with all but a small coterie of colleagues. He’s socially awkward. He always insists on walking home alone while his family rides in a car. When he enters his home he sees his wife sitting at the edge of her bed, but when she spies him she quickly stands up and slams her door shut. Not a popular guy or one given to endearing himself to others, his forte is an ability to focus intensely for long periods on seemingly mundane details (during which he wears ear protectors to shut out the noise).

His focus has not been entirely fruitless, however. Years ago, Eliezer noticed small differences between the Jerusalem Talmud used today and the passages quoted by scholars from the Middle Ages. This led him to develop a theory that there had been an earlier version of the Talmud circulating in Europe during that time.

He spent years examining hundreds of manuscripts and was just about to publish his theory and findings when Grossman accidentally discovered this very Talmud inside the binding of a book at a library in Italy. Instead of turning it over to Eliezer, who he knew was studying this very topic, he immediately published the discovery, thus rendering irrelevant Eliezer’s 30 years of academic work.

There’s an extremely evocative metaphorical scene of Eliezer standing in the open air surrounded by bales of manuscripts, holding leaves of paper that slowly blow out of his hands. Like Bartleby, he can’t let go of his occupation; every day, rain or shine, he walks to the library, his broken heart bound up with pride and anger.

His son Uriel is big, handsome, extroverted, and charismatic. Also a Talmudic researcher, his personality stands in contrast with his father’s; Uriel is a successful and popular teacher and writer, one of those cornerstones of academic departments with whom all must agree or be denied the niceties and necessities of professional life. But his career success provokes great strain in his relationship with his dad, and this strain spills over into his relationship with his own son.

When Eliezer finally wins the coveted Israel Prize for his contributions to Talmudic research, he tells a journalist interviewing him that he is glad that at long last the department has seen fit to laud real scholarship instead of the charlatanism that has been passing for scientific research. The journalist covertly prods Eliezer to pour contempt on the work of his son, whom the journalist obviously admires.

The film manifests two glaring, deliberate omissions: First, aside from the tight security measures confronting characters upon entering buildings, there’s nary a reference to the conflict with Palestinian Arabs?and no Arab characters appear in the film. Additionally, despite the hours and years spent poring over the Talmud, there’s no evidence that these scholars have taken to heart or put into practice any of the profound spiritual truths recorded there.

The bizarre cutthroat competitiveness of academic life in this university not only sabotages the very enterprises and social goods it endeavours to support, but also has infected what is, according to Freud, one of the most significant of relationships. There’s the faintest suggestion that Zionism, or the habits of mind that go with it, has so unbalanced the Jewish male that he’s willing to sacrifice Isaac again and again, refusing the offer of the briar-tangled ram.

Footnote manifests five of the Mindful Bard’s criteria for films well worth seeing: 1) it is authentic, original, and delightful; 2) it poses and admirably responds to questions that have a direct bearing on my view of existence; 3) it stimulates my mind; 4) it provides respite from a sick and cruel world, a respite enabling me to renew myself for a return to mindful artistic endeavour; and 5) it makes me appreciate that life is a complex and rare phenomenon, making living a unique opportunity.

Dear Barb – Setting a Timeline Can Help with Difficult Decision 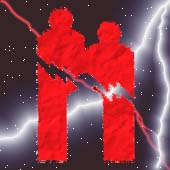