Columns
The Voice
The Mindful Bard – A Separation 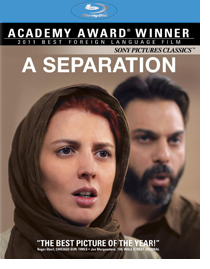 ?Whenever You’re in conflict with someone, there is one factor that can make the difference between damaging your relationship and deepening it. That factor is attitude.?

The Family as Nation in Turmoil

In an effort to escape a turbulent Tehran (we can assume the story’s set in the wake of Iran’s 2009-10 Green Revolution), Simin and Nader have gone to a lot of trouble to acquire immigration visas for themselves and their 11-year-old daughter, Termeh. Now that the visas have arrived and will only be valid for a few months, however, Nader tells his wife he simply can’t leave his father, who is now in the advanced stages of Alzheimer’s. She argues that his father doesn’t even know him, but Nader insists that he’s his father nonetheless.

Certain that deep down Nader’s love for her outweighs his sense of duty, Simin files for divorce. The judge refuses, saying she has no good reason to divorce her husband. As she leaves she throws the judge an accusing glance, as if assigning blame for the pending catastrophe.

Back home, her father-in-law knows something is wrong but is unable to name it; he grasps her arm and implores her by name (?Simeeeeeeeeen!?). He’s grown attached to her and senses her imminent departure. She’s obviously touched, but remains determined to go.

Simin moves out, but she hasn’t really left the country; their daughter has decided to stay with Nader, so Simin has moved in with her mother to wait for Nader and Termeh to change their minds. Nader knows his wife won’t leave the country without her daughter, and he reassures Termeh that her mother’s absence is just a momentary caprice.

Because she’ll no longer be her father-in-law’s caregiver, Simin gets her husband to hire Razieh, a gentle, refined woman married to a man whose personality disorder prevents him from providing a stable home for her and their young daughter. Even though She’s pregnant, Razieh feels obliged to sneak out to work without her husband’s knowledge; she needs to bring in some money to keep his creditors from dragging him off to jail every few days.

The plot presents us with a carefully constructed network of moral dilemmas. Simin is motivated by rather conventional desires: She wants a good future, especially for her daughter. Her brick wall is comprised of the distinctly nonpragmatic attitudes of those around her.

Razieh’s deep religious piety, by contrast, is the ultimate deciding factor in all she does. However, her spirituality is composed more of fear and superstition than of the joy and tranquility that often settles on the deeply religious. Her unshakeable devotion to her husband exceeds that of Nader toward his father, and yet is superseded by her commitment to Muslim obedience.

The young Termeh is a jury That’s perpetually out; she coolly judges the shenanigans of the adults in her life with a child’s firm sense of values, all the while remaining loving and playful. Tragically, She’s the major casualty in this crisis, torn between two warring value systems.

It’s tempting to dislike Simin for placing desires for prosperity and stability ahead of her marriage, but the deep sensitivity of the face of actress Leila Hatami prevents us from reducing her to a shallow pragmatist. We feel Simin’s sincere response to the pain around her even as we’re annoyed with her tendency to avoid blame and heap it on others. We also feel for her when she realizes her husband doesn’t love her enough to follow her to another country.

Because of the strange series of events that ensue, what Nader first describes as a whim of Simin’s quickly becomes a permanent fissure. In the end, the marriage fails the test; Simin is embittered because her husband prefers duty to his father to love for his wife, and he’s irreversibly disappointed in his wife because She’s forced his to make such a difficult choice.

The realism and sincerity of the film aren’t diminished by its allegorical nature. This is in fact the story of Iran and the extreme polarities of commitment (including religion, family, and material well-being) that wrench it apart despite a profound national desire for unity and peace.

It’s interesting that in order to get this movie made, director Farhadi appears to have made a minor moral compromise similar to those shown in the film itself. Production was halted by the government of Iran and only restored after Farhadi publicly apologized for a speech he’d made calling for the return of certain exiled filmmakers.

Powerful feelings expressed and retained in a volatile context can set off waves of hard feelings, vendettas, and moral compromises which in turn trigger further calamities. Farhadi has succeeded in humanizing the crisis afflicting many Middle Eastern nations at this critical juncture in their histories.

A Separation manifests six of the Mindful Bard’s criteria about for films well worth seeing: 1) it is authentic, original, and delightful; 2) it is about attainment of the true self; 3) it inspires an awareness of the sanctity of creation; 4) it displays an engagement with and compassionate response to suffering; 5) it gives me tools of compassion, enabling me to respond with sensitivity and efficacy to the suffering around me; and 6) it makes me appreciate that life is a complex and rare phenomenon, making living a unique opportunity.