Articles
The Voice
In Conversation With . . . Giacomo Gates, Part I

?Gates is more than a jazz singer. He’s a musician, a hornman who ?plays? through a wonderfully weathered baritone voice. He’s also a storyteller, a traveler who’s seen and lived a lot of life. It’s a combination that gives his performance an unusually deep emotional and musical resonance. Giacomo Gates just may be the Dennis Hopper of vocal Jazz.?

The Planet Was a Different Place

Giacomo Gates is a baritone jazz singer known for his engaging vocalese, a form made famous by Lambert, Hendricks, and Ross, among others. Vocalese is composed by fitting new lyrics to jazz tunes and even to fast, complex instrumental solos. (Read the Voice review of his latest album, The Revolution Will Be Jazz.) Recently Wanda Waterman went to hear Gates sing at Blackstone’s in Laconia, New Hampshire, as part of the New Hampshire Jazz performances.

Giacomo Gates had his first singing engagement at the age of six. He’d been enrolled in a tap dancing class. ?When the recital was about to take place,? he recalls, ?I didn’t want to dance. I was told, ?If you don’t dance, you’ll have to sing.? Solid. I sang ?Pretty Baby? in front of eight boys and girls tapping. That was my first gig!?

Many gigs later, we’re at the posh Margate Resort in Laconia, on New Hampshire’s Lake Winnipesaukee, the summer home of city folk who descend like clouds of locusts to take in beaches, forests, miles of small amusement parks, and every water sport imaginable.

We enter the beautifully designed main building and after some labyrinthine wandering arrive at Blackstone’s, a deliciously intimate yet airy enclave. There we meet Jonathan Lorentz, his pork pie hat sheltering an incongruously fresh face (why does one expect a weathered face under such a hat?). Lorentz is the founder of New Hampshire Jazz, a wonderful new initiative to bring the best live acts to local and visiting jazz fans. Music promoter is his second vocation; he is himself a lauded master of the sax.

Bassist Bruce Gertz and pianist John Funkhouser mount the stage, take their places, and nonchalantly begin to open up an immense musical vista that sweeps away the mundane and adds a dimension of timeless elegance. In the audience we are instantly connected to the rich, manifold history of jazz while at the same time the musicians are pointing a way forward into the new unknown.

Lorentz arrives to introduce the musicians. He then presents Giacomo Gates.

Giacomo mounts the stage, folds his lanky frame onto a wooden bar stool, politely gives Bruce and John a song and a key, and launches into a standard. The experience of seeing and hearing him live after having listened to his recordings for a week is like walking from a closet into an arena. The man is a natural performer and his voice is better suited to spaces than to audio recordings.

And in the one area that makes jazz performance so delightful to watch?that of group rapport?this little group is a joy to observe. Giacomo signals solos and whispers song titles and keys as Funkhouser grins his approval of a particularly sweet bit of singing. We hear the mounting mutual approval in the piano keys and bass strings, and even in Giacomo’s singing as he’s egged on by ever more witty and energized playing.

During the intermission I ask Gertz and Funkhouser how long they’ve been playing with Giacomo. John looks at his watch and smiles: ?Just over an hour.?

Gates was born and raised in Bridgeport, Connecticut. His father was a skilled welder who worked on aircraft and racing cars and later in life did torch metal sculpting. His mother was a seamstress and homemaker.

Growing up, Giacomo listened to his dad’s classical and big band records. In addition to exposing him to good music, his father set an example of musical discipline by being an accomplished amateur violinist. Giacomo began taking guitar lessons at the age of eight.

?By the age of 16,? he says, ?I was playing with musicians who were in their late teens or early 20s, and we played for weddings. Back then wedding music came from The Great American Songbook: Cole Porter, Gershwin, Rodgers & Hart, Arlen, Berlin, etc. I was exposed to some of the best music of the mid-20th century. By the time I reached my late teens, my interest in playing the guitar lessened, but I continued to sing for the fun of it.?

Giacomo attended an engineering college but dropped out after a year. He preferred, he says, actually constructing roads to drawing up the plans for their construction.

?At the age of 25, I split for Fairbanks, Alaska, because I’d heard about the Trans-Alaskan Pipeline and had always been interested in Alaska and Australia. It took me a year to get the kind of work I was interested in, and in the meantime I worked odd jobs: bartender, sheet rocker, landscaper, tour bus driver, railroad labourer, carpenter’s helper, and relief dealer and bouncer in a gambling casino, where I also occasionally escorted some of the working girls back and forth to work.

?I worked and lived in Alaska for several years, then spent a year in Washington State, a season in Arizona, and a short time in Louisiana, working road construction, dam jobs, and offshore drill rigs.? 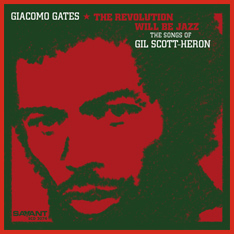 Gregor’s Bed – The Revolution Will Be Jazz