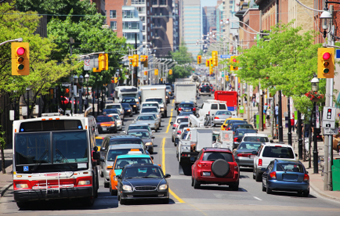 It’s no secret that our automobile-dependent culture spells bad news for the planet. Our gas-guzzling vehicles deplete natural resources and sully the air with toxic gases, and our discarded vehicles frequently end up in landfills, with minimal recycling available.

But the environmental impact isn’t the only concern. As The Atlantic reports, our health is on the line, too; a new study links a driving-dependent neighbourhood with increased risk of diabetes.

It’s logical that ?if you have the choice to stroll to school, or the corner store, or even just the nearest bus stop, all those steps add up over time.? But now the Toronto-based study, published in Diabetes Care recently, offers ?hard data? to prove it.

Researchers discovered that ?people who lived in less walkable neighborhoods were significantly more likely over time to develop diabetes.? The walkability of a given neighbourhood was determined by looking at ?population and dwelling density, street connectivity and the availability of nearby retail and service destinations.?

The problem was even more significant for immigrants, many of whom are at a higher risk due to ?genetic predisposition to diabetes.? In fact, new immigrants who lived ?in a less walkable neighborhood [were] more than 50 percent more likely to develop diabetes than a long-term resident of Toronto living in one of the most walkable areas, regardless of neighborhood income.?

As one of the first studies that concretely links urban growth patterns with health management, it raises significant questions for the future of urban planning.