Features
The Voice
Editorial – No Way 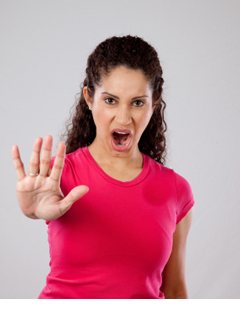 When we were kids, it was all about the ?no.?

In our first years, ?no? was our favourite response. Come indoors. No. Put away your toys. No. Eat your spinach. No, no, no!

No was a bad word.

Once we left the preschool years, though, that ?no? became a shining star?a goal to pursue, a standard, an ideal. ?It’s okay to say no,? said the teachers and parents and the safety films we watched every year in elementary school assemblies. ?No? to strangers. ?No? to adults bearing treats and strange requests. ?No? was a fallback, a safety lock. We had the power and we could use it.

As we moved into the upper grades, ?no? morphed into cool. Say ?no? to drugs, underage drinking, teen sex, bullying, and texting while driving. Say ?no? to the bad and live your life. Be safe, be cool, be happy. Just say ?no.?

Then something happened. We reached adulthood, and somehow ?no? had become the bad guy once again. Why, I’m not sure. Yet we all know It’s true, even if we don’t outright say it: we’re not supposed to say no anymore. Turning down volunteer requests from the kids? school feels wrong. Saying ?no? to that board position or the chance to spearhead the office fundraising auction seems selfish. And skipping that party is just silly, right?

Intrinsically, there’s nothing wrong with volunteering or getting involved or taking on another social commitment?they’re all good things, things we want for ourselves and the community. And yet sometimes, the urge to say ?yes? can overtake our lives.

Sometimes, it feels as though we’re always going. Every second of our lives has been scheduled or planned or allocated, and even the things we were looking forward to have become a chore, one more thing we have to do. we’re overwhelmed with work and worry. Life has turned into the proverbial hamster wheel. We not only can’t win, we can’t even take a step forward.

That’s when we need?for our own survival?to relearn the skill of saying ?no.? Of realizing that we have limits. That we have priorities. That we can’t be all things to all people. That It’s okay to pause, think, and say ?no,? freely and without guilt. That It’s only by saying ?no? that we can get ourselves into a condition that will allow us to someday give an honest ?yes.?

No, I can’t take on one more thing. No, I’d love to come but I’ve got a prior commitment. No, I’m already at capacity. No, my family/studies/work have to come first. No, I’ll give everything I have, but I can’t give more than that.

And whether we’re little kids turning down strangers with candy or grown-ups trying to take the reins of our own lives, It’s okay to say ?no.?