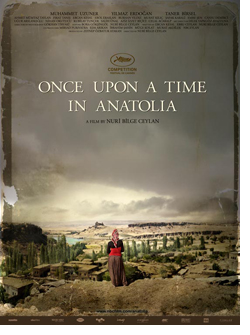 ?Life is but a dream for the dead.?

?Krishna was once asked what was the most miraculous thing in all creation, and he replied, ?That a man should wake each morning and believe deep in his heart that he will live forever, even though he knows that he is doomed.??

The Long, Slow Waltz of Love and Death

The men are searching for the body of a murder victim. they’re depending on the murderer, now in their custody, to show them where it is. As they drive into the night of a bleak Turkish countryside (a great setting for a staging of Waiting for Godot), they become increasingly frustrated with the murderer’s failure to identify the spot where he buried the unfortunate victim.

Tensions mount. The murderer falls asleep a couple of times and the officer beside him is roundly scolded. The detective thinks the suspect is having them on, and at one point puts the boot to him in a fit of pique.

The detective, his Arab partner, the prosecutor, and the doctor reveal bits and pieces of their personal tragedies as they chat idly. Their dialogue is punctuated by false alarms; again and again the murderer must admit that the spot where he’s told them to stop is not in fact where he’s buried the victim.

We see flocks of birds dipping and soaring on their way south as the doctor fakes a cell phone call to keep from having to answer questions about the murder victim. Both life and death are things to flee. Human beings flee the irritations of family life by evading accountability and avoiding true communication. The imminence of death is the frightening truth behind the veneer of custom and social harmony, and the discomfort and emptiness of life an excuse for running around in futile circles. Even the stirrings of sexual desire are just another bother, something reminding us of our mortality while bringing even more trouble.

Still, life calls to us; and we can’t resist the call, as witnessed by the young son of the murdered man, trudging sadly home with his mom and suddenly running back to kick an out-of-bounds soccer ball back to some playing children.

All the acting is excellent, but Taner Birsel, who plays the prosecutor, is phenomenal. Birsel obviously had to undergo a marked physical transformation to play an older, heavier man with a handsomeness blemished by birthmarks, a man who reveals a tragedy that occupies his thoughts and influences his decisions. The emotions pass like ballet dancers across his lovely, marred face.

The doctor clearly represents the writer, the one who observes, interprets, reports, and delivers the final verdict. Others seek him out for answers and also to attempt to control his interpretation of things. In the end he is left with the awful responsibility of attributing blame.

At one stop on the weird journey, the doctor wanders off to relieve himself. For a moment the lightning illuminates a rock sculpture of a huge face with a gaping mouth. It’s as if the collective voices of the dead are crying out from the ground, saying, You’ll be joining us soon, comrade.

Death is the star in this film. The plot is dedicated to locating it, judging it, and coming to terms with it, or at least trying. Meanwhile life, the antagonist, is presented in Sartrian style?sticky, slimy, steamy, deeply irritating, and ultimately tragic.