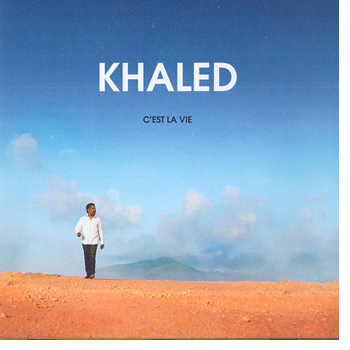 ?Baba el Jana? (?The Door of Paradise?) by Sam Debbie, sung by Khaled

?I know how men in exile feed on dreams.?

That’s Raï: Joyful Anthems of Defiance in the Face of Loss and Exile

There’s something about Khaled’s smile. It sums up the message and the feeling of his music, almost as if saying, I will accept with joy the gifts my God has given me, and no one can stop me!

Khaled’s history presents a survey of the dilemma facing both youth and artists in the Maghreb, particularly in his native Algeria. As much as the West fears Islamist terrorists, fundamentalists pose a much greater threat to other Muslims than they do to the Western world.

Every once in a while the West draws the fire of volatile extremists with tasteless videos and cartoons, and this might give Muslims in the Middle East a bit of a reprieve. But for the most part, moderate Muslims in Arab countries live under the constant threat of punishment from overzealous fellow citizens, people who feel that it is their religious obligation to attack women who don’t wear the hijab, those who don’t show proper respect for a volume of the Quran, or, worst of all, vocal artists who sing danceable love songs in public.

One of the casualties of this ongoing crisis is the exile of Khaled, whose joyful hymning of love and joy won him death threats and eventually drove him from his native Algeria to live and work in Europe (much to the benefit of the French recording industry). The work he continued to produce in exile was partly responsible for developing the sense of rebellion and autonomy that led to the current climate of defiance among youth in the Maghreb.

In fact, in most of this album’s songs, defiance carries a celebratory tone. Social disapproval for a couple’s love just makes it more insistent. The verses of the title track, ?C?est la vie? (?That’s Life?) are Algerian Arabic, but the chorus is in French: ?I’m not sad about the past. Even though You’re far away from me, the others speak of us?they don’t like our relationship, but you’ve got to suffer for happiness. And the night is very long. A Bachar [a bringer of good news] comes and tells me that I’m Niya [a naïve person who knows no sin] and that She’s Nasraniya [the opposite of Niya]. we’re going to dance, we’re going to love?That’s life!?

Raï was originally a women’s genre’sung by women and only to each other at weddings, with songs extolling romantic love?and slightly bawdy. Much as Elvis and other white Americans took black musical genres and broadened their commercial appeal, so Khaled brought attention to this little-known ?women’s? genre and made it a popular music phenomenon.

Life, in raï terms, revolves around waiting for love to arrive or return:
?Elle est partie?: ?My heart is wounded. I weep; my only hope is to see her again. She’s gone from me. Yesterday at this time she was still with me. We were both in love. I need you to stay with me. I was so happy, but her departure has made me ill. I’m poor and there’s nothing I can do. Friends, forgive me, but I have no one else to whom to express my misery.?

?Dima Labess?(?Always Well?) is performed with Mazagan, a Moroccan rap group. It expresses a wish to return to the homeland and live in peace there:

Mazagan: ?Come, Khaled, let’s construct a big house for our dear friends who come to visit from all the towns, a house where nobody closes the door.?

Khaled: ?I’m not a foreigner?It’s my country, no matter what they say. Here I will be happy and proud with dear friends, and always well.?

Mazagan: ?I believe in destiny, and in dying in the country of heroes. we’re going to lift the curtain.?

Fans of Pit Bull will laud his appearance on the track ?Hiya Hiya,? but It’s a bit of a stain on Khaled’s more human aesthetic?superimposing a shallow macho grunt on top of a hard-won sensibility that honours love and tenderness.

Khaled is a phenomenally good pop singer, a strong and passionate voice at ease with his own genre but also with rock, reggae, and blues. He’s also managed to attract some of the best European artists and recording producers, all of whom really seem to get his aesthetic and his message. The tracks on this album present a cross-section of genres favoured by youth in the Maghreb, but they also have a broad appeal that have made them extremely popular in Europe, especially France.

Khaled’s music strikes a sympathetic chord with artists in general because there’s a sense that we’re all in exile. So let’s all get together, dance, love, and keep on creating. C?est la vie.

This article would not have been possible without the kind assistance of Driss Akjij of Meknes, Morocco.