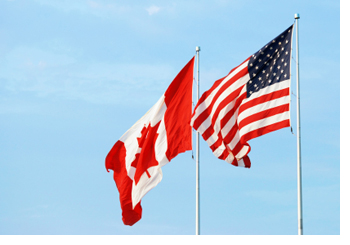 My family’s been skipping back and forth across the Canadian-American border for generations, and many of us, including yours truly, hold dual citizenship. The events of September 11 persuaded the government to demand for the first time that we get passports to move between our two native lands, for which inconvenience we felt mildly insulted.

Though I was born in the US, my family came to Canada when I was three. I was raised, educated, and indoctrinated in the ignorance, apathy, and commitment to tolerance and moderation that makes us proud to be Canucks.

For the last year I’ve been staying in the North Country (everything above Crawford’s Notch) of New Hampshire. It’s in the mountains, winters are cold, and the natural splendour makes your jaw drop. Just like home. you’d think.

My dad’s a born and bred New Englander, and I’m now residing in the town where he grew up. I share a lot of the values of the people here: the stoicism, the commitment to hard work, and the sense of honour.

A sense of connection between Canada and New England goes way back. In 1812, a proposed invasion of Canada (then still a small British colony) by a group of overzealous Americans, still a bit heady from the success of the Revolution, was met with a stubborn recalcitrance from New Englanders. Despite a zealous marketing campaign, every last one of the Northeasterners was against the invasion, maybe because, like our family, everyone had relatives in Canada. There really was no good reason to go to war against Cousin Resolved across the border in Danville.

In spite of the historical and familial ties, however, the thinking remains different between the two nationalities. When I came here I was already well aware that differing histories and propagandas had rendered certain topics of discussion untouchable. I told myself that I wouldn’t get into political discussions, and in over a year I’ve only slipped up twice: once by pointing out that maybe the antipathy to socialized medicine was a symptom of a lingering fear of communism, and a second time by admitting that I could not take sides on the abortion issue.

Emotions are heavily invested in certain issues, and it’s easy to offend. Americans tend to define themselves more by their belief systems. they’re also a little more drawn to confrontation; they don’t mind hurting feelings and calling each other idiots, but for Canadians that just doesn’t seem right.

So it was with slight trepidation that I decide to vote in the 2012 presidential election.

The polls are in a large brick community building. Outside, an assortment of ancient men in plaid flannel jackets and hardware store hats are standing around or leaning on a fence, holding Mitt Romney signs. I ask them if it’s a good day to vote.

“Aaaany day’s a good day to voooote,” one answers, with dollops of New England inflection. “But It’s an aaaaawful cold one!”

I think to myself: They can probably tell just by looking at you that you believe in social anarchy, natural food, and putting all of Wall Street in jail. Shut your mouth and keep walking.

I enter a huge community hall with a few tables, about a dozen officials, and a row of voting booths. Young people in camouflage fatigues are walking around in pairs, looking authoritative. I don’t know why they’re there, and neither, it seems, does anyone else.

Back home in Bear River, Nova Scotia, we vote on the first floor of the fire department, moving through a hallway and two crammed rooms before reaching the booths. Nobody ever pickets outside. The voter is greeted with smiles of approval. we’re glad you came, they seem to say. Those who know you chat you up and ask about your folks.

There’s some of that here in small-town New Hampshire, too, but with that coating of frost we’ve come to expect of New Englanders. In both places there’s a super-friendly, perky person making everyone feel at home, as well as a curmudgeon who openly disdains the way things are done now.

I show my passport and birth certificate at the table in the entrance. They have to call the capital in my case, because I have neither a New Hampshire driver’s license nor a social security number. But they’re happy to do it and even seem a bit pleased—this is a first for them, and they mention this several times. Some of the older people remember my dad, uncle, and aunts; this makes it seem just like home.

After I leave I recall my father telling me how my grandparents used to drive to the polls here. My Vermont grandmother always voted Democrat and my New Hampshire grandfather always voted Republican. He would kvetch at her all the way to the polls: “Why are we even bothering to go? we’ll just cancel each out!”

My grandmother would sit there in stony Yankee silence and then vote her way.

Fly on the Wall—Canada Day: A Celebration of Us