Columns
The Voice
The Mindful Bard – Mysteries of Lisbon 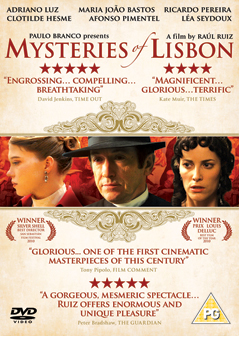 Screenwriter: Carlos Saboga (based on the novel by Camilo Castelo Branco)

?He was a just and virtuous man who was unfortunate.?

from Mysteries of Lisbon

?She has a shrine of love in her heart. They turned it into a cup of bile.?

from Mysteries of Lisbon

Father Dinis is a kind of sacred investigator, one of those rare Christians who actually follows the dictates of his master with all his might. His every waking moment is a mission to ingeniously?and sometimes dangerously?counterbalance the effects of sin and hypocrisy in this vale of tears.

It’s always nice to see a sage and genteel clergy in films; it balances out the extremes of self-righteous pedophile types we’ve seen recently in film and other media. This particular priest is deeply archetypal while remaining achingly human, a divine messenger sent to grieve and set right the spiritual confusion in which society tends to wallow.

Angela de Lima is the daughter of a wealthy Portuguese marquis, a man whose charm masks the psychopathology that rules his every thought. She has been raised in great luxury, but because She’s the second-born, she will inherit nothing. Her father insists that she marry only someone who shares her noble status and harbours enough wealth to keep her in the manner to which She’s become accustomed.

Pedro, her inamorata, is a count and also a second-born child; he fits the first criteria, but not the second. This lack, coupled with their intense love for each other, leads to a series of catastrophes. The two are not permitted to marry and thus begin to meet in secret.

Their meetings result in Angela’s name being dragged through the mud by high-minded society dames who feign shock at premarital lovemaking in spite of being themselves actively involved in adulterous affairs.

I was reminded of a passage from a Victorian book of etiquette that proposed that, love-be-damned, the true duty of a young girl to society is to marry someone her social equal or better. As much as society chooses romantic love as the entertainment of choice, when real love enters the parlour (which, as Jacques Brel asserted, is extremely rare), It’s briskly shoved out of doors in a rush to keep the young from making ?unsuitable? marriages.

That’s where Father Dinis comes in, dropping allusions to God’s love for Hagar, asserting the worth, in God’s eyes, of illegitimate children, and putting the Pharisees to shame.

An interesting touch in the film is the boy Pedro’s use of a small ?kindertheater,? a kind of paper doll mini-theatre in which he stages the characters in his own personal drama, illustrating his own joys, sorrows, and fears.

Every shot a frameable work of art, Mysteries of Lisbon is a sumptuous costume drama minus all the excesses of pomp that often spoil such works. The themes are deeply universal and, despite changing mores, have timeless relevance.

Mysteries of Lisbon manifests seven of the Mindful Bard’s criteria for films well worth seeing: 1) it is authentic, original, and delightful; 2) it poses and admirably responds to questions that have a direct bearing on my view of existence; 3) it provides respite from a sick and cruel world, a respite enabling me to renew myself for a return to mindful artistic endeavour; 4) it is about attainment of the true self; 5) it inspires an awareness of the sanctity of creation; 6) it displays an engagement with and compassionate response to suffering; and 7) it makes me appreciate that life is a complex and rare phenomenon, making living a unique opportunity.