Columns
The Voice
The Mindful Bard – She Dreamt That I Died 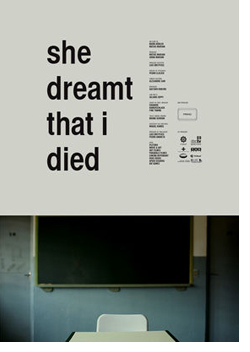 ?Think! We are prisoners and shall always be.
Fortune has given us this adversity,
Some wicked planetary dispensation,
Some Saturn’s trick or evil constellation
Has given us this, and Heaven, though we had sworn
The contrary, so stood when we were born.
We must endure it, That’s the long and short.?

The interview subjects wear different-coloured prison fatigues that look like ER scrubs. They sit facing the camera in what looks like a classroom. Behind them is a blackboard, on which some of them draw maps of the prison and explain what goes where.

It seems like they’re our teachers. But then they’re sitting behind what looks like a small desk, and so they also appear to be students.

They come from all over the world. As they talk they paint mental pictures, some clear, some foggy, of how they ended up serving sentences in Brazil. You wait for prison life horror stories, but they never come; apparently these inmates are well taken care of and are not required to mix with dangerous types.

Soon you realize that the film’s not meant to be so much a poster advocating for prisoners? rights as a kind of postmodern Canterbury Tales, each story a different window on the hypocrisy and vice of the age. This time It’s not England, but the global village; the travellers are from all over the world, and instead of meeting at a wayside inn they share their stories in a South American clink.

Occasionally they look directly at the camera, but just as often they look in different directions to address their comments, suggesting there’s a crew huddled around the camera. We can also guess that this crew is rather unresponsive, judging by the number of times the subjects look for affirmation. (You see? You know? You understand? Was that good?)

One young woman in the film, a singer, is particularly mesmerizing. It’s amazing to listen to her, not just because of her direct gaze but also her remarkable sang-froid that carries almost to the end of her speech. She frequently declares her love for those She’s left behind (or who’ve left her behind), and even though she hints that some of these relationships were abusive she sees this as normal in a love relationship. Her acceptance of it adds a tragic dimension to her story.

What’s especially wonderful is the lilting quality of her voice, rising and falling in cresting waves as she voices her perplexity:

?My whole life is a puzzle . . . I’ve tried so hard to be the best person I can be . . . I just seem to win and then lose and win and then lose . . . Coming to Brazil to sing I was thinking, this is my breakthrough! And a guy gives me a bag of shoes and I am in prison . . . I don’t understand anymore what the universe has planned for me.?

It’s a kind of No Exit; at first you think, This really isn’t as bad a fate as I’d thought, and then you see how irrevocably we’re at the mercy of others. Fate is a drug-dealing psychopath, and he’s got a package he wants you to deliver.

She Dreamt That I Died manifests four of the Mindful Bard’s criteria for films well worth seeing: 1) it is authentic, original, and delightful; 2) it poses and admirably responds to questions that have a direct bearing on my view of existence; 3) it stimulates my mind; and 4) it makes me appreciate that life is a complex and rare phenomenon, making living a unique opportunity.