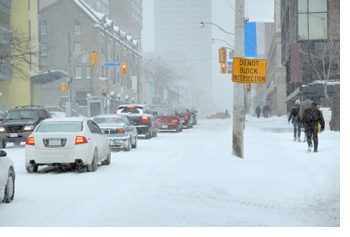 I have had my license for almost two decades. I have driven in wind and rain and snow and ice and, quite by accident, a thunderstorm that produced tornadoes. I spent two winters in Alaska, where roads don’t get salted because we all want to protect the moose. I should know a thing or two about driving in bad weather conditions.

Yet the thing or two flies out of my head when I first notice the snowflakes settling on the windshield of my vehicle. Instead of relying on years of experience, I rely on panic.

It served me well once before.

But at all of 17, I had it together. I crawled down the dark, unlit country road toward my house, secure in the knowledge that I knew what I was doing. And That’s when it happened.

When you picture an icy slide, you picture loud skidding, screeches of tires, inevitable crash. But there was none of that. Slowly, silently, the car began to move diagonally across the empty lanes. Slowly, silently, the tree-filled ditch loomed. It took hours to cross ten feet of road. The car was on invisible wires. Moving. Asphalt. Gravel. Dirt. Weeds. Then it stopped.

Wedged in a snowdrift, at six in the morning, on a dark country road. No cellphone. Freezing cold. At least a mile from the nearest house. But my initial thought was not safety, but terror. Holy crap. My parents are gonna kill me.

You know how they say you can do crazy things when the adrenaline rush comes? How you can have the strength of Superman, or something? I panicked. I got out of the car and waded into the snowdrift. And then I pushed. With all the nervous energy of a very freaked-out teenager, I pushed.

I crawled back into the seat. I gingerly navigated home. I crept into the house and back into bed. It was a decade before I could even tell the tale. And it will be a few more before I recover from it.