Features
The Voice
Editorial – Joy to the World 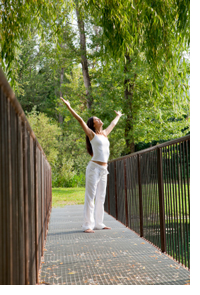 Merry Christmas. Happy Holidays. The debate still plays out bitterly, with people in both camps grumbling Grinchily about the supposed ill intentions of the other.

But they’re missing the point. Increasingly I’ve realized that what we should be paying attention to instead is something different: the other word in the greeting, the feeling we’re urging rather than the event itself. In today’s world, we need something a lot deeper than merely ?merry? and ?happy.?

?Merry? connotes a festive atmosphere: parties, lights, decorations, brightly wrapped gifts. But for some who have experienced tragedy recently–serious illness, the death of a family member, mental health problems–it feels forced. And in the light of some of the horrific news stories crossing our radar, can we legitimately act ?merry? and pretend everything is fine when It’s not?

Even ?happy? is inadequate. Unfortunately, ?happy,? once a reference to something deep and interior, has been skewed by pop psychobabble and ill-informed self-help books. we’re all on a quest for happiness, we like to say, but very few can put a finger on what this golden grail actually is. In a stroke of irony, ?happy? now seems to mean the same thing as ?merry?–the very fate the happiness obsession sought to avoid.

Greetings like ?Merry Christmas? and ?Happy Holidays? are like a set of bells, but bells, as Poe taught us, form a wide spectrum of feeling and emotion. Sometimes the bells ring out, filling the world with a breathlessness of anticipation; but sometimes the ringing is tinny, repetitive, devoid of feeling or meaning, even telling a ?tale of turbulency? amid their brassy falsity.

I think a better wish, especially this holiday season, would be for ?joy.? Joy is hard to see, hard to express, and hard even to explai; It’s not something we can seek or find or even be gifted. It’s more of a fruit than a tree, a result of careful planting and tending by practicing contentment, acceptance, love, peacefulness, tolerance, and generosity. All of them things we like, but don’t really talk much about–because they’re hard to practice.

But practice we must. Joy is like a mirror, reflecting only what we put into it. It’s like the man in Nathaniel Hawthorne’s ?Great Stone Face?; eventually, spending his life imitating the qualities of that structure, he began to resemble it (or it him). By working on attaining joy, we too will be filled with the real thing. It’s only then that we can begin manifesting it to others.

For me, for you, for the whole world: joy is my deepest wish for the coming new year.