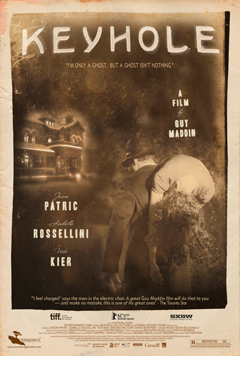 ?She was so naked. No one’s ever been so naked.
I’ve kind of lost it. Where are we?
we’re in a locked room.?

Ulysses is in the House (But Is That Really a Good Thing?)

This happens to me a lot when watching avant-garde films: My jaw drops and I say, This is amazing! It’s a groundbreaking piece of cinematic art!

And then: I can’t stand to watch it!

Yes, this is one of those. It’s a retelling of part (the arrival home) of The Odyssey?one of the pillars of Western civilization?in all its archetypal brutality. The myth is just as salient in the postmodern West as it was in classical Greece, but in this instance it exposes the breakdown of civilization rather than its triumph.

Keyhole is like one of those dreams in which You’re desperately trying to get somewhere but wake up without having obtained your goal, having instead encountered myriad shocks, traumas, delays, and frustrations along the way. It’s a black and white fantasia in a 1940s setting, the grand old house that is a maze of weird happenings, the action consisting of all manner of sound and fury, signifying nothing.

Ulysses is home, but his family does not experience him as fully present to them. Instead of suitors, the house is crowded with his henchmen, a bunch of criminal ne?er-do-wells just like him. He has killed two people and buried them in the backyard in holes rapidly filling with torrential rain.

What is impressive are the techniques Maddin uses to synthesize the dream state. For one, for the first three quarters of the film there’s a sharp disconnect between the actors? facial expressions and what they’re saying. For another, none of their words say anything clearly. They mouth a string of clichés and senseless introspective autobiography, musings in which meaning takes a back seat. Watching it presents a formidable mission to the rational, conscious mind.

Adding to the dream sensation are the mannerisms of the actors; every movement and facial expression is highly awkward and stylized, as if these were children play-acting, and the jittery, too-close camera heightens the primitive dramatic mystique.

The easily titillated might look to this for its many naughty bits, but the sex is awful in its absence of boundaries, and the naked bodies for the most part are not beautiful?and neither are they meant to be.

Maddin was much more coherent in My Winnipeg (the film won Maddin the title of ?Canada’s David Lynch?), a fantastical documentary that nonetheless used clear language to explain a whacked-out view of this very white-bread Canadian city.

At the risk of interpreting something uninterpretable, the only salient signification of this film is its shameless representation of our age’s anxiety about fathers and fatherhood. In a deep sense, Western civilization feels let down by its individual fathers, spoon-fed Playboy values until they can no longer see beyond their own primal pleasure-seeking.

Writ large, the drama exposes the severe disappointment we feel in patriarchal systems that promised to protect us and help us grow strong but instead strive to keep us confused and infantile. In such a nightmare the house, i.e. the domestic sphere, once a necessary and comforting ego defense, has become a terrifying prison.