Features
The Voice
Bumps on the Road, Part I 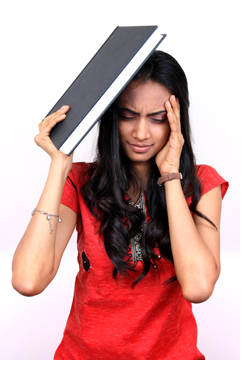 What’s a student to do when a crisis arises?

Things were going well; out-of-my-mind busy, but well. The house wasn’t particularly clean, but full-time work and part-time school, coupled with family and volunteer commitments, meant that something had to slide. Work was moving along, and for the first time ever I’d become really excited about my studies. I’d narrowed my focus, selected more challenging courses, and added another class to my course load. I was ready. I could handle it.

Then came the crisis.

My son, who has special needs and whose emotional and behavioral issues had always caused tension at home, at school, and on the playground, was abruptly dismissed from his school. They were unwilling to accommodate his needs; he was disruptive; and to be honest, he wasn’t learning anything. It was time to begin the process of creating an individualized education plan with a new school, one that hopefully would accept him, embrace him, and want to help him. In the meantime, on top of work, school, and the emotional exhaustion that accompanies raising a child with special needs, I would need to homeschool him until we could find a permanent school placement for him.

As you move along on your educational journey, chances are you’ll run into some obstacles. When It’s something small?a nasty bout of the flu that derails your schedule, or a big work project that eats into your study time?it can be incredibly frustrating to navigate around it. But sometimes these ?bumps on the road? are more like full-on wrecks: windshield smashed, bumper twisted, maybe even flames flickering out from under the hood. When It’s a question of something serious, like divorce, death in the family, financial crisis, or an issue with a child, It’s hard enough to figure out how to deal with the problem itself, let alone things like work, education, and other commitments.

In a time of crisis, studying from home has its advantages. It does allow for a more flexible schedule; it does mean a certain freedom to shift priorities and lifestyle. But it also means that figuring out where everything stands is a bit more confusing.

In this series of articles, we’ll take a look at some coping strategies that may help you navigate your way through the crisis and safely to the other side.

When we meet with an obstacle, we’re traditionally urged to redefine our goals, at least temporarily; in other words, to prioritize, to decide what’s important and what’s not.

Often the perception is that the crisis takes precedence over everything else. And in a way, it does; I have to teach my child right now. I must come up with the paperwork to get him the help he needs. He requires weekly therapy and at-home intervention. But so often the emphasis on prioritization is taken to mean that everything else should go by the wayside.

That’s dangerous thinking. ?Prioritize? doesn’t necessarily mean letting go of your dreams and commitments in favour of that nebulous notion of ?more important.? Nor does it mean pretending that your pre-existing commitments don’t matter. In fact, doing so can drastically increase your stress levels, not to mention prolong the emotional and physical damage to yourself, since you’ll have to deal with catching up with the mess later, after the more immediate problems are resolved or stabilized.

Instead of trying to prioritize, organize. Start out by writing a list of everything going on in your life: the big stuff, like work, school, and of course anything referring to the crisis, but also smaller commitments (cleaning the bathrooms, doing the banking, grocery shopping) and regular practices and habits (weekly yoga class, calling your mom, curling up with a novel). Make it a major brainstorming session. Enlist your partner, friends, and kids: what do I need to do? What do I like to do? Whether It’s important or not, write it down.

But now what? What if everything is important? don’t the dishes have to get done eventually? What about those clients? Who’s going to take care of my kids while I get caught up in my history class? And how do I explain all this to the people to whom I have commitments?

Once you’ve got that list in place, you can move forward with the next step in organizing. In next week’s article, we’ll take a look at a better way of prioritizing and discuss why you can and should ask for help?and where you should be looking.

Bumps on the Road, Part I