Articles
The Voice
Gregor’s Bed – Haiku for a Season 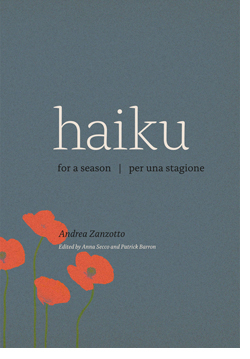 ?Joy of July, source of all joys
in the shape of haiku or, maybe, other poems?
sweetly, palely in nature
sleeps the writing
The little volcano named July
lets flow a tender lava for everything?
let life be something
more than a dream?

Andrea Zanzotto in Haiku for a Season

Splendour in the Poppy Field

It’s thanks to this slim little volume, which Zanzotto carefully crafted in the years between 1984 and his death in 2011, that yours truly the humble lay critic first encountered this wonderful poet and his image-rich inner landscapes, even though he’s thought to be one of the most prominent European poets of the 20th century, noted also for his translations and a stint for Fellini (Casanova and E la nave va).

Strictly speaking, the poems in Haiku for a Season are not haiku; rather, they approximate homages of which Ezra Pound would have heartily approved, a whittled down imagism more effective than most of what passes for the form today.

Zanzotto chose this approach because he saw what he described as a ?glittering energy? in the minimalist lines, an elan evoking the ideograms of Japanese language. He was enamoured of the haiku’s simplicity and magic elements. If, as Northrop Frye said, the poet in the modern world exists to keep the primitive mindset alive, the haiku perhaps still exists to quicken the primitive essence of postmodern poetry.

Zanzotto wrote these poems first in English and then in his native Italian–the translations face each other–and even if you don’t know the language it won’t hurt to read the Italian verses aloud: you’ll pick up meaning from familiar shreds of Latin roots and you might also hear that melodious linguistic oboe that carries the essence of these spare words.

A frequent motif is the poppy, whose red colour and opiate qualities have long rendered it a symbol of sleep, both nocturnal and eternal. Demeter was said to have created the poppy to put herself to sleep after the loss of her daughter Persephone, but in Zanzotto’s mythos the poppy is the thing that silences dreams, visions, the pen, and the sense of being truly alive.

Perhaps the title signifies a soporific state both for the poet and the culture he lives in, a condition that simply can’t last, and a dream landscape ripe with signs of an impending awakening.