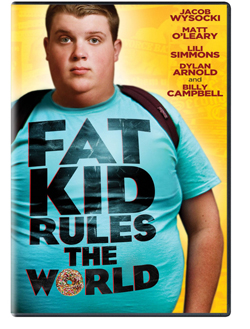 ?Misfits aren’t misfits among other misfits.?

Have you ever painted yourself so tightly into a corner that when an obviously dysfunctional person came along and offered you a hand up you had no choice but to accept?

And even after that person wrecked your life and the friendship ended, you couldn’t help but look back at your relationship and thank your lucky stars for all the things that weirdo brought into your life?

Meet Troy: fat, unattractive, uncool, and always depressed. He walks in front of a bus and is rescued by Marcus, a druggie musician who’ll turn Troy’s life around in exchange for the privilege of raiding Troy’s medicine cabinet and wallet on a regular basis.

Naturally, Troy accepts, and with a little coaxing becomes the drummer in Marcus’s punk act. Then stuff starts happening. His relationship with his family is forced to turn a new corner, away from the slough of despond. He has to deal with grief at his mom’s death and bitterness at having been a social leper during the most important period of his social development. Girls start to notice him. He even writes a song expressing his angst and fury and starts to figure out what he really stands for as opposed to the image of himself he’s always seen reflected in the eyes of others.

External forces play a strong role in Troy’s transformation. There is the Bad Dad: a cop, asymbol of the establishment and oppression. As in Anna Karenina, we’re at first encouraged to see Bad Dad as someone to hate as we sympathize with the protagonist. But in the end It’s Bad Dad who’s the only one who sincerely loves and who has the strength of character to withstand extreme grief without caving in to his own weaknesses.

The punk band, too, transforms Troy by placing him in a new context. His role as a drummer comes with all the favours being in a band might entail, and because It’s punk no one is allowed to say that he can’t play because he’s too fat, too nerdily dressed, too depressed, or too anything. This is a cogent view of the essence of the punk ethos that refuses the hip in favour of the outcast. (In effect, Malcolm McLaren’s stylized leather and safety pins were a complete and unfortunate misunderstanding of true punk.)Witness the Canadian band Fucked Up, with its obese, schizophrenic singer who flaunts his body on stage and shouts the anthem ?Crooked Head? to broadcast his mental condition like a flame-red freak flag. There’s also the young guy in the film The Rejected who wore shorts to show off his mechanical leg, and Beth Ditto posing her unfashionably plump nakedbody on a magazine cover among the sticklike mannequins.

That’s really why those of us who love punk, do. Come on, did you think it was actually about the music?

If That’s not enough, there’s also a death-by-vehicle motif representing the refusal to suffer loss: in the first case the loss of a sense of self and in the second the impending loss of a friend who has compelled Troy to know himself.

Fat Kid Rules the World manifests seven of the Mindful Bard’s criteria for films well worth seeing: 1) it is authentic, original, and delightful; 2) it harmoniously unites art with social action, saving me from both seclusion in an ivory tower and slavery to someone else’s political agenda; 3) it provides respite from a sick and cruel world, enabling me to renew myself for a return to mindful artistic endeavor; 4) it is about attainment of the true self; 5) it inspires an awareness of the sanctity of creation; 6) it displays an engagement with and compassionate response to suffering; 7) it makes me appreciate that life is a complex and rare phenomenon, making living a unique opportunity.