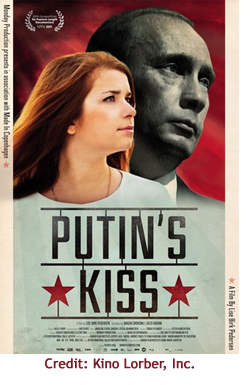 Cast: Masha Drokova (as herself), Oleg Kashin (as himself)

?If you want a vision of the future, imagine a boot stamping on a human face? forever.?

we’re treated to visions of lively, healthy, drug-free youth dancing, singing, and chanting ecstatically. Isn’t this what we’d all like to see? Wouldn’t we love young people like this on the streets of North American cities, instead of the dejected panhandlers we see there now?

Masha Drokova is the cherub-faced young girl who heads the main line of NASHI, calling itself Russia’s anti-fascist youth movement. NASHI’s members root out and shame pimps, drug-pushers, and owners of illegal gambling facilities, and host public rallies in which grocers are publically lambasted for selling outdated groceries.

Opposition leader Boris Nemtsov voices Putin’s fear that the Russian people will rise up and dethrone him, as was done in the Ukraine’s Orange Revolution. So Putin has invested heavily in NASHI, bussing thousands of young people to public rallies and staging sabotages of opponents? political activities. Says NASHI commissar Anton Smirnov: ?We find out where they will have an event, then we will occupy that spot.?

The participating youth experience an exhilarating power, and the movement’s leaders receive various perks. Not only that, but NASHI headquarters is also cool, looking like a comfortably seedy college radio station, the walls collaged with magazine articles, posters, and bright graffiti.

It would be hard to imagine Western hipsters, hippies, punks, Rastafarians, or any other youth movement raising such a ruckus about outworn food, or being so shamelessly partisan, but then the majority of Western dissidents, at least those in North America, tend to be left-wing if they’re partisan at all. There are of course skinheads, Goths, and other fascists, but these tend to have only a marginal influence. At the shadowy end of NASHI are youth who resemble these rebels, but their influence is considerably less virulent.

NASHI labels opponents of Putin, including journalists and human rights activists, ?enemies of Russia.? And they really are treated as enemies, not opponents locked in a healthy democratic give-and-take. The extremists in NASHI fly obscene (in the shape of a penis and testicles) miniature helicopters over their opponents? rallies. In a show of deep-rooted pathology they defecate on the hoods of ?enemy? cars. Journalists who try to report on these activities and attribute them to NASHI are successfully sued.

NASHI claims to be anti-fascist, but if this isn’t fascist I don’t know what is. Huge expenditures are made to support Putin and his policies and to make a show of youth solidarity in support of them.

Masha says of Vasily Yakemenko, NASHI’s founder, ?He tries to create conditions for a person to constantly grow. But if your growth has stopped, he’ll change his attitude towards you for the worse.?

For his own part, Vasily Yakemenko’s speeches are all sound and fury, signifying nothing, mindless ramblings that say nothing specific but which vaguely hint at the necessity for Machiavellian tactics.

We see the clouds roll over Masha’s sweet face as Yakemenko grumpily rebuffs her question about when to serve lunch. We see her talking to her sister later, looking irritated when she explains her leader’s my-way-or-the-highway mentality. (She apparently has a bit of that herself.)

In 2008 a new executive body was created in the Russian government: the Federal Agency for Youth Affairs, with Vasily Yakemenko at its head, giving him tremendous power and influence in Russia. He officially quit as leader of NASHI, thus allowing Masha to progress in her career there.

Masha entered NASHI at the age of 16 and completely submitted to the orders of her superiors, sucking up their ideology like an eager young sponge and very competently speaking out of their right-wing ideology. After a bit of time she begins thinking for herself. She’s still a zealous proponent of social order and prosperity, but at the same time harbours a deep sense of humanity and social justice. She’s forced to remove her rose-coloured glasses when she learns first-hand of dirty tactics carried out against journalists and members of the opposition.

Masha’s speech at the election for new commissars shows her stance to be more moderate than those of her peers. She really does seem concerned with building a prosperous Russia, but isn’t sufficiently paranoid about those who might prevent this from happening. She loses the election to those giving rants about the ?enemies of Russia.?

Masha begins meeting liberal journalists, the very people NASHI has traditionally lambasted. Some suspect her of spying for Putin. Others see her sincerity and befriend her.

Masha Drokova’s story inspires confidence in humanity’s capacity to overcome brainwashing, to bridge conflict, and to put aside ideology long enough to uphold three of the most universal of human values: equality, freedom, and justice. The fact that this occurred in a repressive regime should compel the complacent West to work a little harder in exercising our own freedom for the better good.

Putin’s Kiss manifests five of the Mindful Bard’s criteria for films well worth seeing: 1) it poses and admirably responds to questions that have a direct bearing on my view of existence; 2) it harmoniously unites art with social action, saving me from both seclusion in an ivory tower and slavery to someone else’s political agenda; 3) it is about attainment of the true self; 4) it renews my enthusiasm for positive social action; and 5) it makes me appreciate that life is a complex and rare phenomenon, making living a unique opportunity.