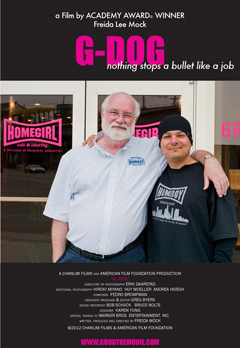 ?God is love, and those who live in love, live in God.?

World’s Most Creative Application of the Social Gospel

Diane Keaton sits down in the Home Girl Café. The waitress doesn’t recognize her, but while taking her order the young woman suddenly stops and insists that She’s seen Diane somewhere before. Diane plays dumb, remarking that she must have ?one of those faces.? The waitress suddenly lights up.

?Now I remember!? she exclaims. ?We were locked up together!?

Jesuit priest Greg Boyle is full of stories like this, not surprising when you consider that his life’s mission has been to rehabilitate former gangsters and keep them from reoffending. His brainchild, Homeboy Industries, achieved this goal by creating a mutually interdependent communal system of care, support, and accountability to former gang members.

Boyle succeeded where the system had simply wasted its time and money and burned out its employees. He’s proven the naysayers, including the police, dead wrong, and he’s grown himself a huge, happy family of young people who love him deeply for what he’s done for them.

They say there’s no music sweeter than the sound of one’s own name, but It’s doubtful whether for members of Homeboy Industries there’s any sound sweeter than what Father Greg Boyle calls them. Father Greg, or ?G-dog? as the homies call him, calls each of these ex-gangsters ?my son,? and within the context of their fatherless lives one imagines that these words are tantamount to the pronouncements of angels.

Father Greg initially started up Homeboy Industries to help the gangsters in his Los Angeles parish. His organization gave them paid on-the-job training, counseling, free tattoo removal, medical help, and a host of other services deemed essential for their new, crime-free and self-sufficient lives, lives some of them had never imagined possible.

Yes, this film is guilty of the heavy-handed hero worship that Americans love to produce and consume in their movies. Much adulation is showered on G-Dog (I’m guessing he’s not crazy about it, either), but the real hero is the motley crew of damaged and wounded have-nots who longed for a better life, glommed onto the first?and only?real solution ever made available to them, and wouldn’t back down until their lives were transformed.

I don’t mean to dismiss the contribution of Father Greg; he really is an amazing person. From childhood to middle age, he seems to have retained a shining innocence and belief in human nature and the process of spiritual transformation. His sense of humour is priceless and he doesn’t hesitate to find?and share loads of belly laughs in the daily life of Homeboy Industries.

The striking thing about his approach is that it begins not with theology or ideology or theory, but with the goal itself: These young people need help, and from the Christian perspective It’s a given that they should be helped as soon and as effectively as possible. So throw out all the social theories and religious doctrines, roll up your sleeves, and get to work.

If G-Dog sees that something isn’t working, he immediately junks it and finds something better. For years he thwarted the expectations of police and lawmakers by simply believing that it could be done, doing it as well as he could, and refusing to get hung up on prejudices and doctrines.

G-Dog and the Home Boys and Girls are visited by Laura Bush, among other notables. They visit the White House. They get on the Dr. Phil Show. they’re visited by religious activists and social engineers from all over the world, reformers who are looking to copy their model of rehabilitation.

And yet they have to lay people off because they’re running out of money.
If the government would just take a fraction of the cash it spends on prisons and the justice system and invest it into funding and expanding Homeboy Industries, crime could decrease all over the US as dramatically as it has in Los Angeles, and a whole lot of money would be freed up for other worthy causes. But the difficulty lies in selling the idea of a communal solution to an individualistic culture, even if the communal solution is the only one that works.

G-Dog manifests six of the Mindful Bard’s criteria for films well worth viewing: 1) it poses and admirably responds to questions that have a direct bearing on my view of existence; 2) it is about attainment of the true self; 3) it inspires an awareness of the sanctity of creation; 4) it displays an engagement with and compassionate response to suffering; 5) it renews my enthusiasm for positive social action; and 6) it makes me appreciate that life is a complex and rare phenomenon, making living a unique opportunity.