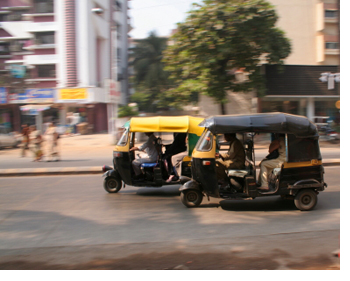 In the past two articles in this series, we’ve taken a peek at life in Mumbai. This article continues the bird’s eye view of one of the largest cities in India. (Read Part I and Part II of the series.)

Where public transportation is concerned, India is convenient, if unconventional?at least in terms of Canadian expectations. Need to go anywhere? There’s always a rickshaw close by, zooming past your flat or parked in a nearby niche, waiting for your business. Rickshaws are easy to hail, and the ride is open (minimal glass and no door on one side) and breezy. Additionally, driving speeds aren’t oppressive, with 50 km/h being the fastest speeds you’ll attain (and these on the fly-over, or highway). The near-constant presence of traffic jams reduces speeds even more. As for safety measures, well?the kids loved the rickshaw’s lack of carseats and seatbelts; returning to Canadian vehicles and seating restraints was a rude shock for them.

What’s the best thing about rickshaw rides? No filling gas, no driving, just enjoying the sights and scenery along the way, but most of all, the freedom to hop in and go places for comparatively cheap. The downside? The dust. The lack of rain at non-monsoon times means there’s no dampening the dust, and nothing to hold it down; a fun rickshaw ride across the fly-way inevitably means a bath later on.

As you might have guessed, tea is a favourite in India, both during the morning and mid-afternoon. In fact, tea is so popular that It’s openly sold in the streets to businesses or passers-by, much like we have snack trucks in Canada. In India, though, the sale is made by the chaiwallah (tea seller), who walks up and down the road in the mornings and at teatime with a platter holding glasses of fresh, hot tea. He sells hundreds of glasses a day, and his tea really is good.

Tea in India tastes different than the tea available in Canada, even if the tea leaves we have here are supposed to be from India or Sri Lanka. It’s far more delicious, and I think the reason may be that although teabags are available in India, using loose black tea to make your chai is more typical. Additionally, the concentration of milk in the tea is higher; usually, It’s made with a milk-and-water base (as opposed to our North American custom of adding a small amount of cream to an already-prepared cup of tea).

It’s hard to describe the taste of the milk in India. When boiled, it tastes the way milk used to here: the flavour of non-homogenized fresh milk, taken from smaller cattle herds. (Conversely, typical milk in North America is homogenized; its cream content is controlled using injections; and cattle herd health is at an all-time low). It’s actually a concern in India that the milk is thinned out with water?makes me wonder what the milk originally tasted like!

In addition to come-and-go vendors, tea sellers, and rickshaws, the streets are often host to celebrations in full swing. Everyone loves a party in India. Several nights there were terrace parties on the rooftop of the building opposite ours; a truckload (literally) of caterers and food arrived in the afternoon, complemented later by balloons, musicians, and rickshaws or scooters dropping off elegantly-dressed guests.

Weddings are also occasions of great celebration. Unlike in North America, where being single or in a common-law relationship is normal, there’s more pressure in India to get married. It’s a whole cultural thing; marriages in India mean new families to meet, new bonds to be made, good food, good music, and good fun. In middle-class families, a wedding involves a splash of money, in the form of several parties (before and after the wedding), new clothes for all the female relatives (provided by the bride), as well as, of course, the usual wedding expenses.