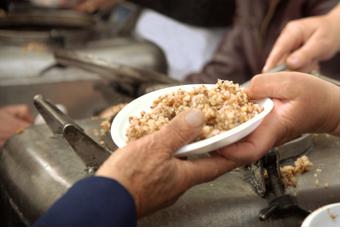 It seems as though tragedy is everywhere. Whether It’s a highway pileup or a shooting or a tornado or a teen suicide, we’re constantly confronted by bad news.

But It’s all unusual stuff: blips in the status quo, a disruption of the norm. What happens when the tragedy is the status quo? When It’s not going away, but It’s not new or exciting enough to make the headlines?

What happens is that we go about our lives oblivious that a child dies every 15 seconds because of malnourishment or starvation. Every. Fifteen. Seconds.

In the time It’s taken you to read this far, a kid died. Of hunger. Of something for which there is a cure.

How is this not newsworthy?

I was driving my daughter to a dance rehearsal when I noticed a sign on the roadside, advertising a meal packaging event. I was kind of intrigued, so later on I Googled them to see what it was all about.

Turns out the event was affiliated with Stop Hunger Now, an international organization that prepares and ships meals to people who are dying of starvation. The more I read, the sicker I felt.

Did you know that 25,000 people starve to death every year? In a country where waste is prevalent, where we get annoyed when the Starbucks guy makes our drink wrong, where we have the luxury of preferring Coke over Pepsi or Lays over Ruffles, It’s hard to believe that.

Or maybe It’s easy, because we don’t have to think about it.

We don’t have to see the starving people.

We don’t have to hear about what’s going on elsewhere, somewhere other than our own insular little first world and its problems, problems that are the exception rather than the rule.

We obsess, hyper-focus on our own tragedies; and yes, they are tragedies for those involved, but for the regular media consumer, they’re often a stand-in for the ongoing tragedies we refuse to see.

This week I asked my daughter to join me in giving up grabbing snacks and drinks at the rehearsal hall. We can bring our own water bottles and fill up at the fountain. We can take along snacks from home. It’s not convenient, but we’ve saved about $20.

That money, which would’ve gone to cover stuff we didn’t really need, is almost enough to feed a child for three months.

This blows my mind.

I hope it blows yours, too.

Editorial – Deal with It.

From Where I Sit – Vision of a Few, Efforts of Many

Dear Barb – It’s Time to Shake Up the Status Quo