On the Crest of a New Mediterranean Wave

Daniela Nardi, scheduled to appear at the Montreal International Jazz Festival on July 5 and 6, is a Toronto-based singer-songwriter whose third album, Espresso Manifesto, is a vibrant, full-bodied jazz tribute to the songs of Paolo Conte. She’s the first female singer to tackle these songs, and this groundbreaking album, recorded in Italy, involves some of the finest Italian jazz musicians (including Fabrizio Bosso, Fausto Mesolella, Michele Rabbia, Gabriele Mirabassi, and Luciano Biondini. (Read the Voice review of her album here.) Recently Daniela took the time to speak with Wanda Waterman about her music, her past, her future, and why Italian creativity periodically awakens and inspires the Western world.

The camera loves Daniela Nardi. She’s just as beautiful in person, but in a different way; her photos present a glamorous, vivacious Venus, but in person She’s more of a Minerva, a lovely, sage woman with an ageless tranquility, with the sad eyes and charming smile that we find so endearing in many Italians.

Daniela remembers a happy childhood in Toronto, as the daughter of Italian immigrant parents. She spoke Italian until the age of five, but after starting school it became less necessary (?My parents were both fluent in English,? she says)?although she never really forgot her mother tongue.

Music wasn’t a huge part of family life growing up. Her father was a businessman, but her mother had always dreamed of being a singer and was quite ready to foster her daughter’s musical passion.

What started Daniela on her musical journey? Oddly enough, a chance occurrence: ?My mother was driving me somewhere and the radio began to play a song by the Osmonds. I immediately said, ?I want to take piano lessons!??

Her mother was a bit taken aback by this sudden announcement, but quickly got to work finding a piano teacher for her daughter. The first teacher wasn’t exactly praiseworthy, but to Daniela’s credit she maintained her love of music, ploughing on until she found an instrument?the bass guitar?that came naturally to her.

She chose to study music at York University because they offered a greater diversity of courses, including jazz and world music. She doesn’t regret it; York turned out to be extremely beneficial in terms of education and connections.

It was only in the last few years that Nardi returned to her ethnic roots in an effort, as she puts it, ?to reinvent myself creatively.?

Why did she choose to record the songs of Paolo Conte? The man is iconic for Italians, his lyrics rich in imagery, irony, and humour?and no woman has ever recorded them. She remarks on a reluctance, from some Italians, to listen to her versions of songs that have gained an almost sacred status within Italian culture. Why should we listen to you when we can listen to him?, they say. But It’s a different story when they hear her sing. Her renditions add a rich female dimension while retaining the virility of Conte’s songwriting style, and at the same time bring his songs to a younger and wider audience.

Every so often Italy exerts a phenomenal influence on world culture, high and low. The exciting creative output of Fellini, Ponti, and a host of Italian immigrant fashion designers, singers, actors, and poets heavily influenced pop culture in the 1960s.

we’re due for another wave, and I don’t see it as a coincidence that Italian Ambassador to the US Claudio Bisogniero declared 2013 to be the year of Italian culture in America. The swelling number of engaging jazz recordings and new movies I’ve been seeing from Italy have borne this out. Daniela appears to be part and parcel of a new period of Italian influence.

She sees this happening herself. Espresso Manifesto was an idea whose time had come, and thus when the project commenced, everything magically fell into place: an idyllic rural sound studio in Umbria, ingenious engineers, a small host of brilliant Italian jazz musicians, and, best of all, the kind of resonant synergy that guarantees a smooth and fruitful creative process.

Coming Up: the Montreal International Jazz Festival and a New Album

?At the jazz festival I’ll be doing songs from Espresso Manifesto and also a couple of Ron’s [her husband, maestro Canadian jazz pianist Ron Davis] songs to give me break,? she says.

What’s next on the horizon for Nardi? Her fertile mind is currently incubating ideas for a new album of Italian songs she’ll mostly be writing herself. ?I could just go back and do a bunch of traditional songs, but That’s been done so much.?

What will does it take to maintain such a high level of artistic output? ?Space and time,? Daniela smiles. ?I’m hoping to soon have more of both.? 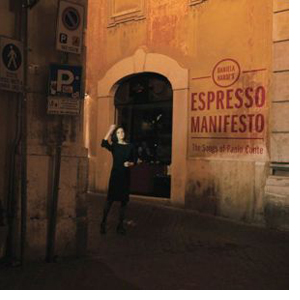