News & Events
The Voice
International News Desk – At Home: End of an Era – Around the World: Under the Sea

At Home: End of an Era

Wendy’s burgers are found around the globe, but there was only one place you could order the T-Rex Burger: the Wendy’s in Brandon, Manitoba. Now the nine-patty T-Rex, which retailed for $21.99 and totalled 3,000 calories, is going the way of its namesake dinosaur.

As the Winnipeg Sun reports, the burger was originally created ?after a fictional ad appeared in an edition of Sports Illustrated magazine nine years ago.? Although it was never listed on the Brandon Wendy’s menu, ?management had obliged almost daily? when customers requested the novelty. The original ad was on display in the restaurant.

However, recent publicity brought the T-Rex burger to the attention of corporate headquarters, and it wasn’t happy. This past week execs told the Brandon restaurant to stop serving the burger, noting in a statement that ?Wendy’s neither promotes nor condones the eating of a nine-patty burger in one sitting.?

The ad has been since removed and the burger is officially no longer available. But don’t be too sad; after all, as one witness told reporters, ?It’s just a triple-triple burger.?

Around the World: Under the Sea

After the tugboat he was working on capsized, a man spent two and a half days 30 meters underwater, with no equipment, food, or water?and lived to tell the tale.

As the Huffington Post reports, ship’s cook Harrison Okene was on board when the tugboat he was working on sank off the coast of Nigeria.

While the other crew members drowned around him (10 bodies have been found, while one is still missing), Okene survived the ?freezing cold water? for 60 hours thanks to a ?four foot high bubble of air? which allowed him to breathe.

He sat alone in the dark, hungry and thirsty, while the salt water caused ?parts of his skin [to begin] peeling away.? Although he was surrounded by blackness, he could hear the fish feeding on the remains of his fellow crew members. ?It was horror,? he told reporters.

He added, ?I was there in the water . . . just thinking It’s the end. I kept thinking the water was going to fill up the room but it did not.? Okene told reporters that it was a ?miracle.?

After being found by divers searching the wreckage for bodies, Okene spent several days in a decompression chamber to allow him to safely re-enter the surface. 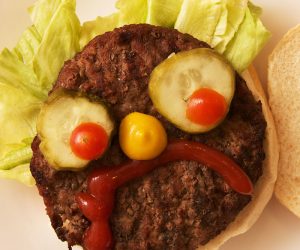