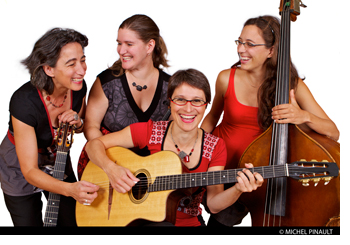 Christine Tassan is an amazing singer and composer and an acoustic guitar maestro in the gypsy jazz and French chanson traditions. She’s also an electrical engineer and a film director. Her band, Les Imposteures, is composed entirely of women, all formidable musicians in their own right. They’ll be performing together at the Montreal International Jazz Festival June 29 and 30 on the Bateau-mouche. Recently Christine took the time to answer Wanda Waterman’s questions about her life, her career, and what It’s like to surprise new audiences with hot club jazz.

Jazz is sometimes an acquired taste, and gypsy jazz can border on elitist. How do average audiences react to the dynamic sound of Les Imposteures?

?Last weekend we went to play at Sudbury for the third time,? says Christine. ?This time we were playing at a small pub for the second half of the show. It was midnight. We looked around and said, ?What are we doing here?? There were a lot of young people and we just assumed they wouldn’t listen to us and might even make fun of us.

?But I just said to the girls, ?Okay, let’s rock!? And we started to play with a lot of energy. The young people really listened and even got up and started dancing! Our bassist, who had been the most reluctant to start playing, was the first one to admit she’d had the crowd all wrong. The outcome was really different from what we’d expected.?

Christine had a happy childhood in France. Her mother played the piano, and Christine was given some elementary lessons in piano music theory, but what she really wanted to play was guitar. When she was seven or eight she finally got one, but it was a toy. Nonetheless she played it, fantasizing about being a singer and guitarist like Georges Brassens and the other French singers she idolized.

When her parents realized she was serious, she got a classical guitar and started taking lessons. ?I really loved my first teacher,? says Christine. ?She gave me a passion for the guitar. After that I had another teacher, a man, and I really loved him, too.? She would go to her guitar lesson an hour early to listen to the other students and would also stay a little longer after her lesson. One day she sang her teacher a song she’d written.

?That’s good!? he said. ?Bring me another one next week!?

The rest is gypsy jazz history.

?I remember one show I did with Les Imposteures in Quebec City at Le Festivale de Jazz in 2007. It was a huge audience, and we really gave a good show. When I got off the stage I said, ?Wow, that was wonderful. That’s what I want to do with my life!??

Tassan is an electrical engineer, a seemingly incongruous parallel career for an acoustic guitarist, but even more surprising is that someone could have two such demanding callings. Engineering training alone is grueling enough to plough under even the best minds and leave them for dead, but adding to that the training required for jazz guitar is hard to imagine.

Five years of classical training were a great foundation, but Christine really wanted to sing and play improvisatory jazz.

?The switch was difficult because when you learn a classical instrument, you just play the score?you really don’t know how the score works. For jazz you really need to know the chords for the harmonies and to improvise. Another difference is rhythm; in classical music you increase and decrease the tempo in prescribed ways. But in jazz you have to really feel the inside rhythm of a piece and do that while working with other people in a group. How you phrase it is totally different from classical music.?

Every member of Les Imposteures is female. Was this intentional? ?Not really,? says Christine. ?I really like working with male musicians, too. It just happened because we were three friends, but then we actively sought a fourth female member so it could be a women’s band. Then it became a little bit political because there are very few women instrumentalists playing jazz, and even fewer playing gypsy jazz.?

Where are Les Imposteures headed after the Montreal Jazz Fest? Two more shows for the summer and then a performance in Tacoma, Washington, then Newfoundland. Christine is also doing a teaching gig at a tango music camp in the United States.