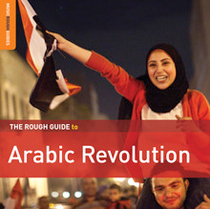 ?In the midst of darkness, I am a star
And in the throat of the oppressor, I am a thorn
I am a blaze of fire blown by the wind
I am the soul of those who never forgot
I am the voice of the martyrs
I melt iron into clay
And turn it into a new love story
Into birds
Into homes
Into gentle breeze and refreshing rain?

from ?Kelmti Horra? (?My Words Are Free?) by Tunisian singer-songwriter Emel Mathlouthi (translated by Anis Brinsi)

Last night I visited Orientalys, part of the Festival du Monde Arabe in Montreal’s Old Port, and was struck for the umpteenth time by the joy and sensual expressiveness inspired by Arab music and dance. While watching the joyful smiles and swinging haunches, it occurred to me that it must have taken a formidable, unrelenting pressure for Middle Eastern dictators to squelch the spirit of dissent for as long as they did. Submission doesn’t come easily to Arab peoples, male or female. How can it, with music like this?

Here for our socially conscious listening pleasure is an album that could serve as a survey course of the Arab Spring, delivering the anthems that punctuated the main historical events of that tidal wave of a long-repressed thirst for liberty. It’s also a wonderful resource for those wanting a succinct view of the most significant musical developments in the Middle East today.

The most salient of these is?as can be expected?the grafting of Western onto Middle Eastern musical genres, something That’s been happening for decades in the Arab world as elsewhere, but which before now was mostly underground. But public spaces that once piped in Celine Dion and Lara Fabian as sandwich fillings for Oum Kharthoum and Fairuz are now making room for some quality homegrown innovations; artists that before could only have been described as underground suddenly came into the spotlight during the Arab Spring and became, to their own delighted surprise, immediately relevant.

The dissident aspect has a wide spectrum on this sampler. We go from renowned British-Iranian religious singer Sami Yusuf’s moving demand, ?Do not harm me?I am your truth, I am your faith, I am your youth,? to the hip hop rants of Tunisia’s El General and Mr. Shooma and Libya’s Ibn Thabit, who brings us the dirge-like ?Calling the Libyan Youth.?

We have Cairokee’s idealized ?Sout El Horeya? (?The Sound of Freedom?) and some very authentic traditional music here as well, including Palestinian artist Ramzi Aburedwan, with ?Kafkef Domouak.?

True, Palestine didn’t technically have a revolution, but neither, technically, did any other Middle Eastern country during the still-ongoing Arab Spring. But Palestine is the hub of the discontent in the Middle East because the Israeli-Palestine conflict represents all that is wrong with the Western foreign policy that laid the groundwork for Middle Eastern insurrection.

The songs on the second CD in this set are contributed by Ramy Essam, the Egyptian who was a prominent presence in Tahrir Square (his song ?Erhal,? which demanded Mubarak’s resignation, is now legend) and who was temporarily detained and tortured by police after Muburak stepped down. These tracks sound a lot like the kinds of songs that were circulating in North America at campfires and hootenannies in the late ?50s and early ?60s.

The ?60s stamp is also fresh on songs from Tunisia’s Jasmine Revolution, represented by Emel Mathlouthi, a magnetic singer-songwriter who brings us the profoundly poetic ?Kelmti Horra? (quoted above). She cites Bob Dylan is a favourite role model.

All well and good, but where are the songs for the tedious democratic process or behind-the-scenes activism, the true catalysts of enduring change? Where are the songs that spur artists, writers, and leaders to inspire the people with the kinds of values that make democracy feasible in the long term?

Let us, brothers and sisters, put our collective minds to this.

Many thanks for the assistance of Anis Brinsi of Montreal.