Columns
The Voice
The Mindful Bard – It’s a Disaster 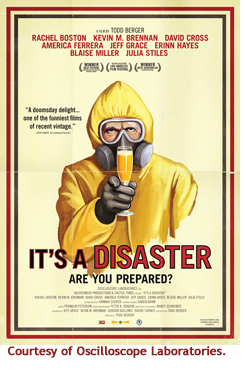 Do People Really Get the End They Deserve?

It’s a ?couples brunch? day. Glen has retreated to a bedroom to try to clear his head after getting some devastating news. Lexi barges in and wastes no time in snuggling up to him as he nervously tries to resist her bold advances. When Lexi’s husband, Buck, enters the room, Glen jumps up and tries to explain, but Buck sits him back down, strokes his thigh, and gently discloses that the reason why his marriage with Lexi is so happy is that they share everything.

It’s the first time Glen has been to one of these couples brunches. He’s Tracy’s new squeeze and is trying to fit in. At first you think he’s the sanest one in the crew, but appearances deceive.

These four couples, privileged, worldly, and successful, are woefully ill-equipped to face their own mortality, and when it stares them in the face their reactions are hilarious (e.g. cooking up homemade hallucinogens, having a glockenspiel singalong, and contriving last-minute adulteries).

There’s one classic black comedy scene in which the two neighbours whodunnits’d been refused entry to the sealed-up house are sprawled out dead on the front steps of the stately suburban home. (?It was us or them.?) Inside, the yuppies are still working through their issues, issues that just don’t matter anymore (if they ever did). You don’t want to laugh, but you have to.

The acting is superlative and It’s obviously intended that the only ones who can inspire our sympathy are those who seem slightly less mad than the others. Several of these actors trained with Second City, and I’d love to see what they did to get into character.

The wonderful thing about irony is the way it opens your eyes to the weaknesses of the age. If this film is any indication, the weakness of today is our addiction to the distractions that help us forget the reality of death, distractions that end up undermining all That’s meaningful in life.

The story doesn’t resolve. Or rather its resolution is in the eye of the viewer, who hopefully will determine how to prepare a better defense should death suddenly loom.

It’s a Disaster manifests five of the Mindful Bard’s criteria for films well worth seeing: 1) it is authentic, original, and delightful; 2) it poses and admirably responds to questions that have a direct bearing on my view of existence; 3) it provides respite from a sick and cruel world, a respite enabling me to renew myself for a return to mindful artistic endeavour; 4) it is about attainment of the true self; and 5) it makes me appreciate that life is a complex and rare phenomenon, making living a unique opportunity.

The Writer’s Toolbox – A Recipe for Eggcorns