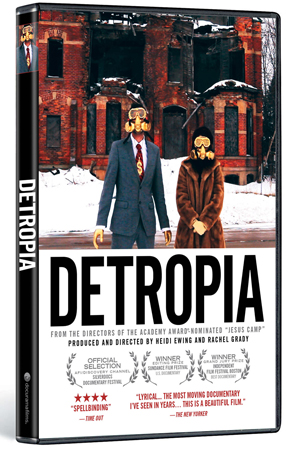 The Dystopian Landscape of Your Punk Dreams

Tommy Stephens, owner of the Raven Lounge in Detroit

I grew up in a small Canadian province that had at one time boasted the highest standard of living in the world thanks to profits gleaned from harvesting then-plentiful old-growth forests to build sailing ships. Now many rural and coastal areas of the province look like parts of the American Deep South?miles of farmland with large hulks of colonial mansions that few can afford to maintain.

When steamships came along, everyone was out of a job. While hordes escaped to higher ground, many stayed behind simply because they loved the land. But sadly the social climate was often dictated by the kind of people who would rather cry in their beer about the old days than try to make the best of changing conditions.

Why do I remember this now? Because there’s a scene in Detropia that brought it all back to mind: a couple of former auto workers are sitting on a porch making fun of passersby, making fun of the government, and making fun of proposed solutions to the current slough of despond. It sounded just like some of the negative nellies I’d known back home.

Detroit is famous for having once generated a high standard of living for people who laboured with their hands. It was a major international success story. But those who thought this was a given were sadly mistaken; the workers who inherited this American dream but had never actually worked to achieve it were very poorly equipped to rouse themselves to action once the dream began to slip away.

There’s a strange fascination in urban decay, and if You’re looking for a shot of wonder, this film is extremely engaging, ripe with beautiful images of rotting mansions, building demolitions, empty streets at night, and idle industrial monoliths. It’s deliciously close to watching a rose slowly wither and die, and just as poignant.

In Detropia Detroit is presented as a microcosm of circumstances in America at large, and the media has given us ample evidence to support that. One video blogger in the film calls DetroIt’s current status a wakeup call for the rest of the country.

Have the mighty really fallen? Has the country that brought us jazz, Hollywood, and Silicon Valley really lost its edge? Will future generations look back on America in the same way that we now look back on ancient Greece?

How is the world about to change?

Artistic Production During Times of Decline

History testifies that the best art often emerges during periods of decadence, when societies begin to lose their grip on their traditional beliefs, values, and material resources. And if Richard Florida is right that the fastest growing job sector in the US is now in creative jobs, maybe this is a time to be lauded, not mourned.

Detroit has seen a 59 per cent rise in the population of young people moving to the downtown. According to the film footage, this group appears to be mostly bohemians bent on pursuing artistic freedom and living out alternative lifestyles in a low-rent economy. One filmmaker delightedly reports that only in Detroit can he rent a great studio and apartment and devote his time to his creative projects.

Detropia manifests seven of the Mindful Bard’s criteria for films well worth seeing: 1) it is authentic, original, and delightful; 2) it poses and admirably responds to questions that have a direct bearing on my view of existence; 3) it stimulates my mind; 4) it inspires an awareness of the sanctity of creation; 5) it gives me artistic tools; 6) it makes me want to be a better artist; and 7) it makes me appreciate that life is a complex and rare phenomenon, making living a unique opportunity.