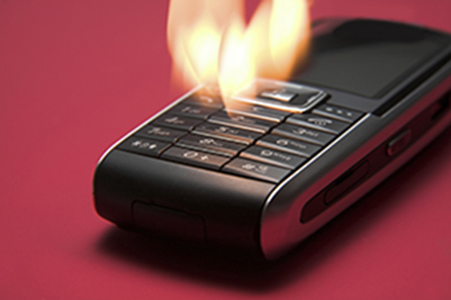 Have you ever noticed that even though we think of desirable stuff as being cool, the image that marketers use to sell everything from jeans to smart phones is heat? The latest fashions are hot. Internet speeds are blazingly fast. That shiny new car will burn up the road. Turns out there might be a lot of truth in those ads: all those goodies are making modern homes burn eight times faster than before.

That alarming news comes from the CBC, which talked to veteran firefighters, including Kingsville Fire Chief Bob Kissner. He’s been a firefighter for 33 years and ?now teaches courses on fighting fires in the modern home.? And boy, have there been some drastic changes in the way we live over the past few decades.

For starters, there’s the furniture we eat, sleep, and sit on. Fifty years ago our couches were likely made of natural materials. Today, technology has brought us an endless array of synthetic materials. They last longer and are easy to clean, but they also contain a lot of oil. Good news when it comes to wiping up spills. Not so good if your house is on fire.

Paul Acton is the chief training officer for Windsor Fire and Rescue, and he explained the danger to the CBC. ?Typically,? Acton said, ?50 years ago, if a wool or cotton sofa was on fire you didn’t see the wool or cotton sofa drip.? With today’s synthetic materials, It’s an entirely different scenario. ?It’s the oils,? Acton explained, ?That’s what all of the studies are finding leads to rapid fire spread and rapid pyrolysis and rapid combustion.?

And It’s not just the flames we should be worried about. The products in our homes are made from such a cocktail of chemicals now that they create ?200 times the amount of smoke that a fire would have 50 years ago.? Even if you manage to fight your way through the smoke and flames, all those plastic gadgets and synthetic surfaces have another trick up their sleeve: in a fire, they release poisonous cyanide.

Does this mean that you should pitch your iPhone and go back to a metal typewriter? No, but you should be aware that you have far less time than you might think to escape your home in the event of a fire. How long? Probably less than two minutes.

According to testing done by Underwriter Laboratories, an ?average-sized room furnished with modern products is fully engulfed in flames in three minutes.? Researchers tested the same room again with items that were 50 years old. The difference was staggering: filled with the older furnishings, the room took 30 minutes to reach ?full involvement,? meaning that it was fully consumed by flames.

Even 30 years ago, the average home offered a better chance of escape in a fire. Chris Williams, Ontario’s Assistant Deputy Fire Marshall, told the CBC that a person back then had a ballpark of eight minutes to escape. Today’s odds are less than two minutes. As Williams says, ?there’s not a fire department in the world that can respond to your home and rescue you in that time.?

So next time You’re updating your apps and syncing your phone, spare a minute to think about updating your escape plan in the event of a fire. After all, your shiny gadgets are replaceable, but You’re not.

The Fires Burn On

The Good Life – The Value of Adversity