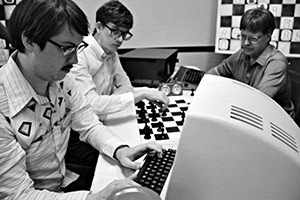 An Eerie Order Behind the Chaos

“It turns out that an eerie type of chaos can lurk just behind a facade of order? and yet, deep inside the chaos lurks an even eerier type of order.” ~Douglas R. Hofstadter

“Just take something mediocre and turbocharge it.” ~from Computer Chess

What if computers can beat humans at one of their own games? Even more important, what does it mean if they can? The Matrix and other films of that type that tried to answer the second question have suggested that even if machines could get mad at us, overpower us, and use our bodies for DieHard batteries, we could still overcome them in the end.

But when you see the people queuing up to either beat computers or help computers beat people, you have to wonder how these particular ones could make it happen. It’s like a Mensa meeting; if you didn’t know it was a Mensa meeting you might think they were all slightly challenged. In person, very high intelligence doesn’t look like Keanu Reaves?it looks more like Mr. Bean.

Here we witness a competition between a bunch of humans (okay, a bunch of guys with one very timid and highly conspicuous female player consistently and patronizingly referred to as ?a lady?) facing off in chess games where the software they’ve developed tells them how to make their next move. The competition is really between chess-playing software programs.

I was a full ten minutes into this before I had that ?wait-a-minute? moment and checked the website for details. The editing is remarkable. The camera has managed to focus on and accentuate the subtlest of headshakes, eye-rollings, and meaningful shrugs, capturing the incredible arrogance and hubris of men at the top of the technological heap (I was about to call them intellectuals, but no). It’s not a documentary, but don’t tell your friends.

And it’s a brilliant premise: use computer chess as a touchstone for exploring (and spoofing) Silicon Valley, the sixties, the pathetically misguided belief in drugs and alcohol as brain enhancers, and, most important, our culture’s belief in the personhood of computers.

A beautiful touch is the inclusion of a conspiracy theorist who’s convinced that the chess tournament is secretly part of a weapons development program initiated by the military-industrial complex. He sells drugs to support his investigations and says he’s just there to witness ?the start of World War III.?

Of course, what sixties-based mockumentary would be complete without a Gestalt encounter group? The computer geeks share a hotel with couples at a weekend seminar who examine each other together with mirrors and stuff their hands into fresh loaves of bread while tittering obscenely. When occasionally, and quite accidentally, the computer nerds connect with the encounter group, the results are hilarious.

The problem that the movie addresses is that so many of us, especially young programmers, think of the computer as a partner, a co-conspirator, or a rival brain. A computer is none of these. Rather It’s a phenomenally powerful ever-advancing tool created and used by the human brain. At best, it’s an extension of the brain. It can’t logically be called “artificial intelligence” because it isn’t intelligence per se but rather intelligence’s carefully manipulated robot arms.

Having said that, a significant portion of what is generated by computers depends on chance and how It’s put to use, especially the things that Carl Jung would have called ?meaningful coincidences.? And what, if anything, is behind chance? That’s the real question.

1. It’s authentic, original, and delightful;
2. It poses and admirably responds to questions that have a direct bearing on my view of existence;
3. It stimulates my mind;
4. It provides respite from a sick and cruel world, a respite enabling me to renew myself for a return to mindful artistic endeavor; and
5. It makes me appreciate that life is a complex and rare phenomena, making living a unique opportunity.