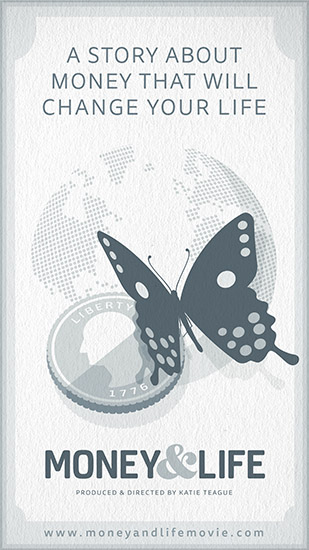 “I tell the story of a more beautiful world. To me That’s a story of the money but more broadly a story of the people. What’s happening is that humanity is moving toward adulthood.”
Charles Eisenstein,
author of Sacred Economics, quoted in Money & Life

According to Money & Life, the world’s financial sector (the system providing loans, credit, and other purely financial services) now values itself at more than twice the value of all goods and services now being produced.

What does this mean for you and me? It means that everything of true value in our lives is in danger of being sucked dry by something that essentially has no value but, rather, is a phantom representative of real goods and resources. Within this paradigm money can’t help but have a damaging effect on our lives, at least, if we grant it that power.

If you’ve been paying attention to our economy, you’ll probably agree that our financial situation is bloody awful right now, and this film certainly reminds us of that. Nonetheless, I so want to call it a ?feel-good flick.? And I don’t mean this in a sarcastic way. Even after all the scary news the movie lays out you come away from Money & Life feeling warm and hopeful.

Money & Life raises the bad news we all know, but it adds some interesting clarifications for us boneheads who get that something’s not right with banks?but can’t quite grasp the mechanics of how the dysfunction operates.

We know, for example, that our monetary system is founded on debt, but what hasn’t been clear to all of us is that the economy requires the creation of more debt just to survive. To pay for past debts, more loans must be given and all current debts must be paid, because even one defaulted loan creates a domino effect. And need we point out how hard it is not to default on a loan?

As many veterans of the nineties stock boom attest in the film, too much money can be worse than not having enough: creating addictions, extravagant and mindless spending, and overwhelming desires for useless things.

The freedom to buy what we can’t afford, coupled with the pressure to pay off debt, can be socially and personally devastating. Joy Hosey of Oregon knows the endless dread and sleepless nights one passes while personal finances spin out of control. But she describes her experience of bankruptcy as being much simpler?and more freeing?than she’d feared.

?And there are so many of us these days,? she says sadly. The man who let her into the courtroom told her that bankruptcy cases used to be held once every six months, but now they were being held twice a week.

Others in the film talk about the devastating effect of debt on marriages, families, and communities, but the thing we really should be anxious about is that the need to pay off these debts means we’re producing and using more goods and services than the planet can sustainably provide. Economists use the Gross Domestic Product (GDP) as a thermometer of well-being. But, it seems increasing the GDP requires us to pillage and dispose of environmental resources as quickly as possible. Converting resources creates ?growth,? even if said growth adds nothing to the quality of life but misery, heartache, and pollution.

This is the connection between interest rates and climate change. My debt pays for your loan, and your debt pays for someone else’s loan, and there must always be another borrower out there to keep us all in loans. The fact that we all owe money means we’re struggling very hard to create more. The same system That’s gulping down all our resources is simultaneously generating the greed that drives consumers to continue funding the growing crisis.

Money & Life skirts the more travelled path of recommending Marxism as a sure-fire antidote. It upholds the usefulness of capitalism but shows up the fault-lines in the existing system. Even those spokespersons in the movie claiming to favour capitalism point out that what we have today is a predatory version, a mutant strain of capitalism that acts like a free radical threatening to destroy its host.

The good news is that there are workable solutions to the current crisis, and when you hear them you’ll realize you’ve been seeing them in practice for years. Here in The Voice we’ve seen a number of articles on the subject of new payment models for musicians, new forms of currency, new ways of cooperating to ensure a good standard of life for everyone, and changes of attitude that consciously move away from status-seeking and wealth-building and toward the pearls that are beyond price: things like family, friendship, tranquility, knowledge, and adventure.

If formerly you dismissed the Occupy movement for lack of direction, be prepared to change your tune. For all the bad press, the movement is an inevitable reaction to an astonishing level of injustice?a reaction coupled with some very cogent proposals for a new financial order.

If You’re curious and want to check out areas related to this film, such as the mechanics of the current financial situation, positive psychology, and new economic models, look at these pieces from the Voice archives:

1. It’s authentic, original, and delightful;
2. It poses and admirably responds to questions that have a direct bearing on my view of existence;
3. It stimulates my mind;
4. It is about attainment of the true self;
5. It inspires an awareness of the sanctity of creation;
6. It displays an engagement with and compassionate response to suffering;
7. It gives me tools of kindness, enabling me to respond with compassion and efficacy to the suffering around me;
8. It renews my enthusiasm for positive social action; and
9. It makes me appreciate that life is a complex and rare phenomena, making living a unique opportunity.