Columns
The Voice
Primal Numbers – Sit On It

It’s a conundrum of our technology-driven life that people are putting in longer hours on the job and are available 24/7 on phones and computers, yet we’re also more sedentary than ever before. Whether It’s typing in a cubicle, staring at a PowerPoint presentation, or getting some downtime in front of our laptop screen, it seems that all we ever do is sit. Which makes me wonder?is adding more technology to our chairs really the answer?

There’s no doubt that many serious health risks come with all those hours of sitting. An article at the Mayo Clinic reveals that It’s not just a few extra pounds we should be worried about. Extended periods of sitting can lead to such serious ailments as cancer and cardiovascular disease.

In fact, a recent study ?compared adults who spent less than two hours a day in front of the TV or other screen-based entertainment with those who logged more than four hours a day of recreational screen time.? Along with other health risks, the group who spent more time in front of a screen had ?a nearly 50 percent increased risk of death from any cause.?

When the demands of school or work often mean long hours parked on our derrières, the obvious solution is to offer more creative options for the objects we sit on. After all, the basic chair hasn’t changed much over several hundred years. Yes, there are different materials, different colours, and even adjustable parts, but the basic form?seat, legs, back?would still be recognizable to a medieval peasant.

One modern update is the Steelcase Gesture. David Pogue has a fun video review of it in The New York Times, and I have to admit that if It’s as cool as it looks, I’d probably spend the first hour just spinning around in it. The Gesture won’t get you off your butt, but it will give you a lot more options to change position.

Then there are the alternatives to a traditional chair, as you can see from this Mashable slideshow. Things like a saddle chair or balance ball chair. There’s also something called an ?active dynamic stool.? While most alternative chairs still keep users in one position, a dynamic stool encourages movement. One such stool is called the Swopper. It’s a bouncy, swivelling, swaying chair that lets you stay in constant motion, even though You’re still seated. There’s a smaller version for kids, too.

Still, I’m not so sure that finding more ways to cater to a sedentary life is the way to go. It’s one thing to shift or bounce around on your chair?it does go some way toward alleviating the ills of sitting motionless. But it doesn’t address the many benefits we’re losing by not walking, bending, lifting, or running.

Aerobic exercise, for example, is known to release endorphins. It affects our mood in a proven, positive way. In a business or school setting, that affects everything from attendance to the way we interact with others and make key decisions. Weight-bearing activities (yes, walking is one) bring their own health benefits.

So, yes, let’s build more ergonomic chairs. But let’s not forget that they can’t replace the normal physical movement that undeniably keeps us healthy. Instead of finding more ways to keep us sitting in comfort, we should look at the outdated cubicle farms that are still the norm in most businesses. Indeed, why not build an indoor playground for workers? I bet that a swing, a slide, and a few monkey bars would have great appeal. The idea might seem fanciful?but a hundred years ago, so did the notion of sitting virtually motionless and staring at screens all day.

The bottom line? Modern technology is fun, useful, and engaging. But if we’re going to spend that much time sitting down, eyes focused on our screens, I hope we don’t forget about the amazing machinery of the human body and the very real need to keep it moving. 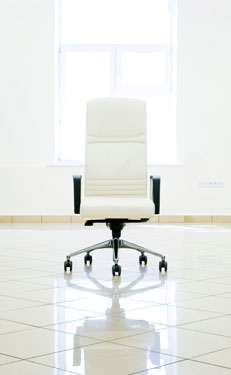