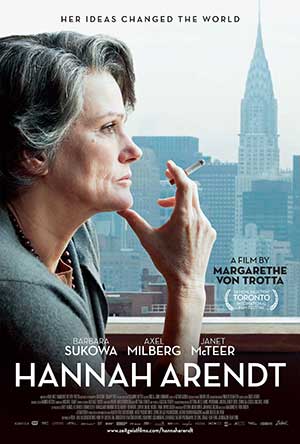 The sad truth is that most evil is done by people who never make up their minds to be good or evil.
Hannah Arendt

Forgiveness is the key to action and freedom.
Hannah Arendt

As Hannah Arendt observes portions of the trial of Adolf Eichmann from the newsroom outside the court in Jerusalem, she does so not as a conventional journalist?measuring, counting, and documenting details?but rather as a novelist, carefully examining his vocal tone, gestures, and facial expressions, as well as those of his accusers, and thereby discerning the meaning behind it all.

Arendt was a brilliantly original and highly influential German-Jewish thinker who managed to escape from a concentration camp to America to pursue a prolific career as a writer and academic. In 1961 she asked the editors of the New Yorker, who were only too ready to oblige the famous holocaust survivor, to report on the upcoming trial of famed Nazi logistician Adolf Eichmann in Jerusalem. That trial forms the backbone of this film.

From the first scene, the conflict is set up as between the banal evil represented by Eichmann and the transformative justice set in motion by the powerfully insightful mind of Hannah Arendt. There is another, less salient, conflict That’s also admirably portrayed in this film?the conflict between the prevailing certainty that Eichmann’s crimes were a result of anti-Semitism, and Arendt’s view that the Eichmann’s crime was not anti-Semitism but rather his slavish and heartless obedience to the system that employed him.

The idea that Eichmann’s crimes may not have been based on anti-Semitism, but rather on a wave of dysfunctional civil obedience?of which the holocaust was the unfortunate flotsam?was a shocking view. Although widely accepted today, at the time not many intellectuals, and not just Jews, were not inclined to believe it, and Arendt was severely criticized in intellectual circles for it.

But when asked about having to choose between such ?civic courage? and his personal conscience, Eichmann admits to having chosen the civic courage, justifying himself by citing the culture and education in which his character had developed.

So he is seen here through the eyes of Hannah Arendt. To her, he is not a devil in disguise (“Eichmann is not a Mephistopheles,” Hannah points out to an intellectual in a café in Jerusalem) but rather representative?a symptom even?of a peculiar form of modern social illness: an inappropriate and inhuman degree of devotion to worldly powers. Seen from this angle, It’s very difficult to limit guilt to one man, party, nation, or culture. From this angle, even some Jews played a part in facilitating the crimes of the holocaust.

For those of us who’ve experienced frustrating levels of injustice from bureaucracy, the courtroom scenes are chilling. Anyone who’s been refused an urgent requirement by a well-dressed, dignified, and dismissive bureaucrat will feel an eerie sense of déjà vu when watching Adolf Eichmann calmly and remorselessly defending his monstrous actions with the excuse that he had been simply doing his duty, following orders like any other good public servant.

The film loses points for some instances of stiff, self-conscious acting but regains them with some other phenomenal performances (sometimes from the same actors), as well as for elegant and true-to-period costumes, hairstyles, and sets.

It is a must-see for anyone needing to understand or to come to terms with the major historical events of the twentieth century and the significance of these events for us today. The film could almost form an extra chapter to Cultural Amnesia; It’s that relevant to the background of the planet’s current dilemma.

1. It is authentic, original, and delightful;
2. It poses and admirably responds to questions that have a direct bearing on my view of existence;
3. It stimulates my mind;
4. It harmoniously unites art with social action, saving me from both seclusion in an ivory tower and slavery to someone else’s political agenda;
5. It displays an engagement with and compassionate response to suffering;
6. It renews my enthusiasm for positive social action; and
7. It makes me appreciate that life is a complex and rare phenomena, making living a unique opportunity.

Fly on the Wall—The Banality of Righteousness 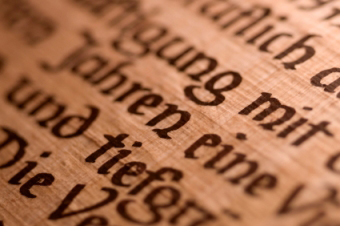