Columns
The Voice
Primal Numbers – When One Door Closes

When we think of technology, the lowly doorknob doesn’t usually spring to mind. Yet its humble presence is a fundamental part of our lives, opening and closing billions of doors every day. Now, the city of Vancouver has passed a bylaw to ban the doorknob from all new private homes. Is it a case of the nanny state going too far?or a step in the right direction?

As The Vancouver Sun reports, the city council ?adopted new amendments to its building code, effective next March, that, among other things, will require lever handles on all doors and lever faucets in all new housing construction.?

Naturally, some people are offended by what they see as heavy-handed bureaucrats infringing on what individuals do in their own homes. One commenter on this CBC blog sums up the general reaction when he writes that the ban on doorknobs in new private residences ?is completely absurd.?

But a closer look reveals that Vancouver council’s decision is anything but ridiculous. In fact, It’s a smart move by decision makers who are being proactive in the face of a rapidly aging population. The rise in seniors is a trend taking place worldwide, not just in a single city or country. The US National Institute on Aging notes that, not only is the number of seniors on the rise, but global birth rates are falling, with the 0-4 age group set to hit a decline in 2015.

And for many seniors, things like arthritis, poor balance, and muscle loss can make opening a doorknob nearly impossible.

No one’s objecting, of course, to making doors more user friendly for those who struggle with arthritis or disabilities. The main complaint given is that the government is forcing people to adapt their private homes to accommodate those issues even if they don’t have those difficulties themselves.

Yet the argument doesn’t hold much water if we look at all the ways the government already does just that, especially in new homes. There are building codes that dictate how wide each doorway should be, and laws that insist we install smoke alarms and carbon monoxide detectors. we’re forced to have a certain number of electrical outlets in each room, whether we use them or not. In many places, all new homes must meet energy efficiency standards, even if we’d rather stuff our walls with old newspapers instead of modern insulation.

And many cities, like Welland, Ontario, even have rules about what kind of toilets our new homes have. These days, in those cities, low-flush is the only way you can go. The ban on doorknobs is simply one of the many construction bylaws that already exist to make life safer and easier.

As with all those other rules, we’ll adjust to life with levers instead of knobs. Soon we’ll be craving the latest decorator styles in door latches, and admiring some artistic new uses for doorknobs. And even if we’re not seniors now, there will no doubt come a day when we’re thanking those farsighted Vancouver councilors for getting the ball rolling and making our aging lives a bit easier.

Of course, you might point to history and the fact that doorknobs signify progress; that they’re a technological advance over latches and levers. But Vancouver’s doorknob ban isn’t a step backward. It’s really more like two steps forward. 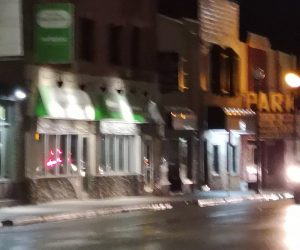